The Politics of Mother's Day

Rebecca Jo Plant, Associate Professor of History at the University of California, San Diego, is the author of "Mom: The Transformation of Motherhood in Modern America" (Chicago, 2010). 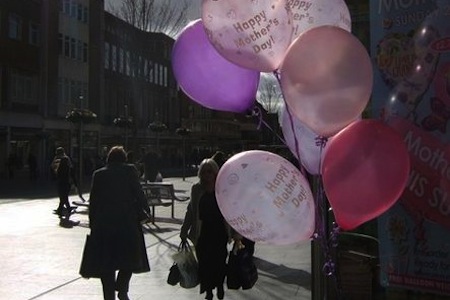 Growing up in the 1970s in suburban Kansas City, Mother’s Day meant rising early with my father and sister to make breakfast and speaking in hushed voices as we crept upstairs with a carefully prepared tray.  Or it meant being allowed to use a paring knife to gather a bouquet of tulips from the backyard garden.

These are personal memories, for I -- like most Americans today -- experienced Mother’s Day as a private, familial holiday that, in its meaning and practices, centered around the home.  Yet for much of its history, Mother’s Day was a truly a national holiday, akin to the way we now celebrate Veterans Day.  It had a strongly patriotic and somewhat solemn tenor, for it honored the sacrifices of both the living and the deceased; many Americans would wear a red carnation if their mother was still living, or a white carnation if she had passed on.  The holiday was frequently marked not only with church services, but also with a variety of public events and ceremonies.

That was not the original vision of Anna Jarvis, a spinster schoolteacher from West Virginia who tirelessly promoted the idea of Mother’s Day after her own mother died in 1905.  Jarvis found herself overcome as she contemplated the “growing lack of consideration for absent mothers” by their “worldly-minded, busy, grown-up children.”  A Mother’s Day, she hoped, would counteract the disruptive forces of modernity by recalling people to the home. Jarvis envisioned Mother’s Day not as a holiday, but as a “holy day,” on which adults would pay homage to their graying or white-haired mothers.  She spent much of her later life railing against its blatant commercialization.

When President Woodrow Wilson issued the first national Mother’s Day proclamation in 1914, he directed government agencies to display the flag “as a public expression of our love and reverence for the mothers of our country,” and he urged private citizens to do the same.  During the World Wars, Mother’s Day commemorations served to reaffirm the connection between servicemen and the home front.  Speaking to a crowd of twenty-five hundred gathered in Central Park in 1942, a lieutenant colonel proclaimed that “the names of America’s war mothers should be inscribed in the nation’s hall of fame along with its military heroes.”  At Langley Field, Virginia, a group of servicemen gathered in a heart-shaped formation to salute a mother who stood in the center, holding her son’s hand.  In Camp Forrest, Tennessee, a military jeep carried a bespectacled octogenerian to a special ceremony where she was crowned “Dear Mom.”  A large photograph in Life , which showed her flanked by military men and smiling young women, looked like a high school homecoming gone awry.

Not everyone approved.  That same year, the writer Philip Wylie attended a party where he heard a friend describe a newsreel that had portrayed an infantry division of American soldiers spelling, in formation, the word “MOM” as a tribute to Mother’s Day.  At the time, Wylie was in the midst of writing a sweeping critique of American culture and institutions, soon to become the bestselling Generation of Vipers.  Although he already planned to take on the nation’s mothers, Allen’s anecdote provided his hook.  “‘Mom’ was the word I needed and ‘Mom’ spelled out by ten or fifteen thousand soldiers was the proper scale:  ‘Momism’ was a natural derivative to describe the unconscious and abnormal piety of the popular mind.”  To Wylie and likeminded critics, the nation’s penchant for “mother worship” revealed disturbing and potentially anti-democratic tendencies.  Charges of “momism” -- a term that remained in vogue through the 1960s -- helped to stigmatize sentimental paeans to American motherhood.

After World War II, the civic and patriotic character of Mother’s Day celebrations gradually waned in ways that reflected a broader transformation of the maternal role.  Images of the self-sacrificing, middle-aged or elderly mother increasingly supplanted those of the youthful, modern suburban homemaker.  In 1956, when the Los Angeles Times ran a Mother’s Day feature, it highlighted only mothers with very young children.  “A mother has the most wonderful ‘job’ in the world!” the article proclaimed, for she enjoyed “the priceless opportunity to give the maternal affection that spells security.”  No longer viewed as a selfless service that women rendered unto the nation, motherhood came to be defined in more exclusively private terms, as a source of personal identity and fulfillment.

The extent to which Mother’s Day had changed by the 1970s is evident in a New York Times account of a party at an elementary school hosted by an association of Puerto Rican mothers.  “If the typical American observance of the national holiday seems perfunctory…” the writer noted, “then in Puerto Rico and other Hispanic domains the annual salute to mother has been invested with the passion and significance of a national obsession.”  He explained how each attendee selected a floral boutonniere, choosing red if their mother was still alive, white if she was deceased, and pink if she lived far away.  Ironically, when Puerto Rican immigrants re-imported a cultural tradition that had originated in the United States, many viewed the practice as reflecting a “Hispanic” penchant for “Madonna worship.”  For by then, few recalled the more the effusive and communal Mother’s Day celebrations that had been commonplace in the United States prior to World War II.