Ed, Do You Really Want to Invoke Ted?

Michael Patrick Cullinane is senior lecturer in U.S. history at Northumbria University in Newcastle upon Tyne. He is the author of Liberty and American Anti-Imperialism: 1898-1909. 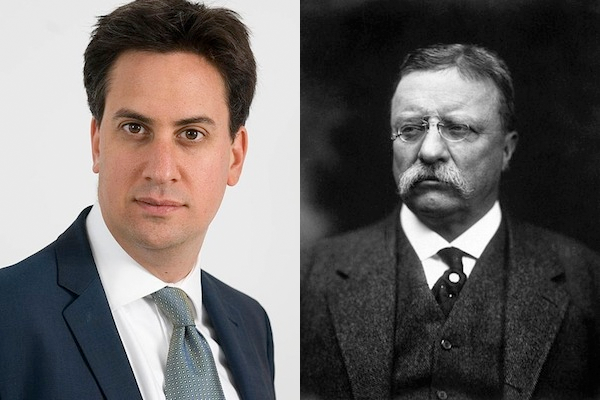 In another attempt to align his stars with those of history’s Walhalla, the UK’s Labour Party leader Ed Miliband has latched onto the legacy of former U.S. President Theodore Roosevelt.  Some Miliband followers might remember it was less than two years ago when he laid invoked the legacy of former conservative prime minister Benjamin Disraeli and his “one nation” moniker in an attempt to bridge the growing partisan divide.  But a comparison to Roosevelt exceeds the limits of comparison, and more, it may be a historical misrepresentation of Miliband’s political intentions.

Miliband displayed his fondness for Roosevelt before Christmas, distributing copies of The Bully Pulpit, Doris Kearns Goodwin latest tome, as a gift for close political aides. The book, named after a term coined by Roosevelt, defines the office of the presidency as a “good” (Bully = good in Roosevelt-speak) platform to influence public opinion, and draws distinctions between how well Roosevelt wielded that power and how ineffective his successor, William Howard Taft, proved to be. Indeed, Miliband understands the importance of effective speaking and has begun employing Rooseveltian gusto in his speeches. First, he used the bully pulpit to declare a Labour government would freeze the nation’s energy prices, sending the utility companies into a profit-fearing frenzy, and forcing the Conservative Party to reconsider its energy policies. Last week he announced the Labour Party’s economic policy, and his personal determination to encourage greater competition in banking.

Here’s where Roosevelt comes in: the Roosevelt biography speaks to his inner politician, but so does Roosevelt’s reputation as a progressive. The period from 1900 to 1920, better known to historians as the Progressive Era because of the far-reaching political and social reforms, has captivated Miliband. The Labour leader can easily imagine a parallel between the economic circumstances, and specifically the corporate excess that preceded the Progressive Era and saw U.S. business conglomerates abuse power to stifle competition. The UK’s banking sector certainly evokes such historical memories. Four banks account for 85 percent of the market share, and Miliband has accused them of offenses akin to those of America’s robber barons. His economic plan offers two options: create two new banks or break up oversized ones. Sound familiar? Roosevelt earned the nickname “trustbuster” for breaking up the Northern Securities railroad merger, ushering in an era of executive anti-trust activism.

This is where the analogy should stop because what Miliband has failed to grasp is the pragmatic nature of Rooseveltian politics.  If the party leader wishes to emulate the “Rough Rider” he may want to explore more deeply his motives when it comes to regulations, banking and the preservation of a robust economy.  The best political biographies dissect the intersections of complex lives within historical contexts, but transplantations made by politicians often hinge on a single theme that distills a complex personality into a singular peculiarity.  Miliband sees Roosevelt as a critic of today’s banking industry, a politician that would urge greater competition and good capitalism; however Roosevelt’s trust-busting reputation far exceeds the facts. He certainly took on banks when aggregated wealth threatened competition, but he also encouraged banking monopolies when it stimulated growth and stability.

The greatest economic crisis that faced his administration came in 1907 amid similar circumstances that caused the 2008 banking crisis -- an over-leveraged and under-regulated banking system created a bubble in commodity prices (copper in 1907, housing in 2008).  Smaller banks became insolvent (think Lehman Brothers, Bear Stearns, and Merrill Lynch) and required recapitalization in order to cover debts or threaten the rest of the U.S. economy with implosion. In 2008, the U.S. government and the Federal Reserve intervened, recapitalized the banks, and offered low interest rates to ensure market liquidity. No Federal Reserve existed in Roosevelt’s day. To restore confidence in the market the president sanctioned larger solvent banks to absorb the losses of smaller banks and increase their market share.  The three largest money trusts, led by tycoon J.P. Morgan bought the majority of the distressed financial assets, including a consolidation of mining and steel companies, extending the wealth and fortunes of elite bankers.

Miliband has conveniently overlooked this episode, and it’s possible that the wider public has forgotten it, too. More typically we recall the legacy of “Teddy the trustbuster,” not “Roosevelt the monopoly-maker.” The co-option of historical personalities are deployed so frequently in today’s political rhetoric that Miliband’s oversight will likely elicit no deep introspection. After all, President Obama invoked the memory of Abraham Lincoln during his inaugural, the image of Ronald Reagan in his first year as president in an effort to appear more bi-partisan, and the legacy of Theodore Roosevelt in 2011 when rolling out his economic reforms. Miliband also joins a long list of British politicians, including Tony Blair, who told how Isaac Deutscher’s biography of Leon Trotsky “made a deep impression” on his life. David Lloyd George read Lord Charnwood’s biography of Abraham Lincoln and overnight became an ardent admirer. William Hague felt so dissatisfied with the biographies of William Pitt that he wrote his own. Blair never explained why the Trotsky biography affected him, but Lloyd George read about Lincoln during World War I and found his life-story a vindication of human sacrifice in wartime.  ]William Hague respected and mirrored the youthful spirit of Pitt, the youngest ever Member of Parliament elected, in his own exuberance as a twenty-eight-year-old parliamentarian.

Miliband sees in Roosevelt a progressive conservative, another centrist image that can help the Labour leader dislodge the sitting Liberal-Conservative coalition.  The upstart reformer with wild ideas and a tenacious spirit is just the sort of image Miliband would like to cultivate for himself.

But if Miliband wants to win election in 2015 he needs to explain why the Labour Party of the twenty-first century deserves to be invoked by successive generations.  His big ideas are certainly making waves, and his oratory skills have improved since taking on the leadership, but a comparison to Roosevelt will only do him a political disservice.  He is not an American cowboy.  He is not a Rough Rider.  He is not the adventurer, or explorer, or hunter that Roosevelt was.  He can make a stronger claim to the mantle of progressive politician, but he is not of Roosevelt’s brand.  And that is not a bad thing.  Miliband will have a better chance winning over voters if he is an original.