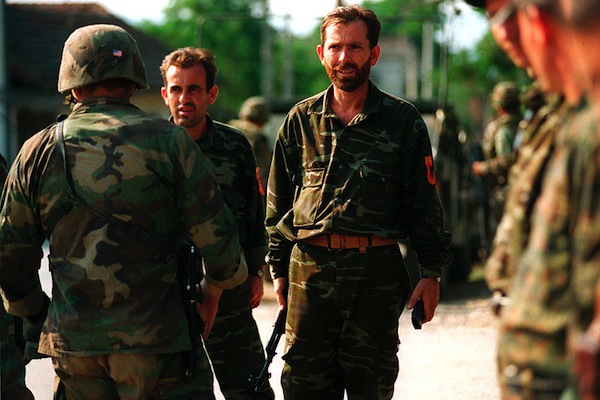 On March 18 Russian President Vladimir Putin formally annexed Crimea amid patriotic festivities that culminated with fireworks in Moscow and the former Ukrainian cities of Sevastopol and Simferopol. Russia’s move followed Crimea’s successful referendum the previous Sunday to break away from Ukraine and officially join the Russian Federation.

In defense of his actions, Putin cited Western involvement in Kosovo as a legal and moral precedent that legitimizes Crimea’s vote and Russian military occupation and seizure of their neighbor’s territory. “Our Western partners,” he claimed, “created the Kosovo precedent with their own hands. In a situation absolutely the same as the one in Crimea they recognized Kosovo’s secession from Serbia legitimate while arguing that no permission from a country’s central authority for a unilateral declaration of independence is necessary."

Putin’s statements echo assertions by Russian officials and journalists that their incursion into Ukraine is analogous to NATO moves against Serbia in 1999 that contributed to Kosovo’s independence nine years later. Despite Mr. Putin’s rhetoric about historical parallels between the two cases, Russia’s seizure of Crimea shares very little in common with Kosovo.

The pretext for Vladimir Putin’s invasion of his neighbor’s territory was a fictitious threat against Ukraine’s Russian-speakers, allegedly preventable only by a rapid military intervention. Unlike Kosovo, these claims of violence were rejected by virtually all reputable news sources on the ground in the area.  Nevertheless, Kremlin leadership advanced the fantasy that the Ukrainian government -- the same government that later submitted to Russia’s occupation and annexation of its territory without a fight -- was on the verge of widespread atrocities against Russian-speakers in Crimea. Contrary to Putin’s claims, there is simply no history of ethnic tensions and violence in Ukraine comparable with those that led to NATO’s intervention in Kosovo in 1999.

In Kosovo, the NATO air strikes against Serbia followed years of escalating violence between Kosovar Albanian separatists and a Serb-dominated regime in Belgrade accused of government sanctioned massacres against civilians. It also followed shortly on the heels of bloodshed during the Yugoslav civil wars that created over one million refugees, led to the deaths of 200,000 people, and added the euphemistic term “ethnic cleansing” to our vocabulary. With Serb strongman Slobodan Milošević -- a man implicated in sponsoring war crimes in Bosnia- Herzegovina -- still controlling Belgrade in 1999, Western fears that Yugoslavia was careening towards another outburst of genocide were plausible.

The process of Russia’s unilateral invasion and seizure of Ukrainian territory also contrasts sharply with the multilateral efforts that took place before Western leaders resorted to the use of force during the Kosovo crisis. NATO’s military campaign against Yugoslavia followed almost a year of intensive work by NATO, European Union, and United Nations officials to reach a settlement that would peacefully diffuse tensions and avoid a military intervention. In 1998, the UN Security Council adopted resolution 1199 demanding an immediate ceasefire, negotiations, and the withdrawal of Serbian security forces accused of repressing civilians in Kosovo. A UN report later found Yugoslavia in gross violation of this resolution. Ultimately, Serbian leadership rejected a series of negotiated agreements as infringements on their sovereignty and continued to build-up their military capacity in the area through early March 1999.  Later that month, amid growing Western concerns about an impending Serbian offensive into Kosovo, NATO finally decided to impose a settlement on Belgrade by bombarding Serb forces. These air strikes ended the last spasms of serious ethno-nationalist violence in the former Yugoslavia.

The speed of Russia’s takeover of Crimea differs considerably from the protracted work that ended with Kosovo’s declaration of independence in 2008. When hostilities ended in 1999, the Security Council passed a resolution authorizing the insertion of a peacekeeping mission to stabilize the province.  Over the next nine years the international community continued negotiations over the province’s future while Kosovo’s Albanian majority worked to fulfill UN expectations for autonomous status. In 2008, Kosovars held a referendum and voted for outright independence as the Republic of Kosovo. While rejected by Serbia and Russia, Kosovo’s autonomy was ultimately supported by the majority of UN member states and an advisory opinion of the International Court of Justice. As a result, the Republic of Kosovo has existed as an autonomous nation since 2008. Unlike Crimea, it was never swallowed by a foreign power.

Mr. Putin showed little regard for Kosovo-style multilateralism in Ukraine, choosing instead to fast-track an invasion and referendum for Crimea’s absorption by Russia. Whereas NATO’s decision to use force in Kosovo took almost a year, Russia waited only six days to invade its neighbor after activists overthrew Ukrainian President Viktor Yanukovych's pro-Russian government in February. Within a week Russian forces overran or besieged strategic sites throughout the peninsula. With Kremlin support Crimea’s Russian-leaning provincial government decided to hold a referendum ten days later over the question of secession from Ukraine and union with Russia. When the UN Security Council convened to deal with the crisis thirteen of the Council’s fifteen members - with the exception of only Russia (who used its veto) and China (who abstained) - voted to reject the referendum in Ukraine, reaffirm the “unity and territorial integrity of Ukraine within its internationally recognized borders,” and discourage “all parties” from “unilateral actions.”

On Sunday, March 16, Russian-occupied Crimea nevertheless pushed forward with a vote for independence from Ukraine and incorporation into the Russian Federation. In the following days Putin recognized Crimea’s autonomy and then announced Russia’s intention to formally annex the peninsula. By the next Friday, Putin signed a decree incorporating Crimea and Sevastopol into the Russian Federation. The entire Russian takeover of Crimea spanned only twenty-eight days from start to finish.

The jarring unilateralism and speed of Russia’s annexation of Crimea in the face of almost unanimous international condemnation bears no resemblance to events that led to Kosovar independence. Today, Crimea is firmly in Russian hands. Although it is pointless to deny this irreversible fact, the international community should reject the historical analogies Mr. Putin abuses as a fig leaf for aggression against his neighbors.