Day 4: Highlights of the Annual Meeting of the Organization of American Historians

Historians in the News
tags: OAH

by Rick Shenkman
Related Links:  The 2014 OAH Annual Meeting:  Videos, News, Everything
This is Sunday morning when things go badly.  It is the panelists’ worst nightmare, when the speakers outnumber the members of the audience. 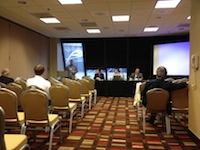 This is Sunday morning when things go well. 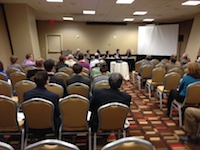 Ironically or appropriately or something, one of the panels that drew a large audience was the religion panel: “State of the Field:  Religion in American History”—though as someone tweeted, shouldn’t the believers have been in church.  It was Palm Sunday after all.
The other panel to draw a large crowd was “New Perspectives on the 1924 Immigration Act:  90 Years Later.”  The title caught our eye.
It almost seemed cheeky for the program committee to settle on a panel on the 90th anniversary of the Immigration Act. But in a year of anniversaries, it was a healthy reminder that not every anniversary is worthy of celebration.  Malodorous events have anniversaries, too. 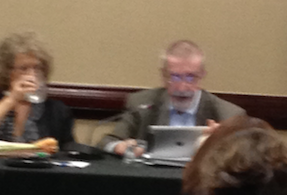 Looking back years from now, it may be this panel that stands out most from OAH 2014.  As we tweeted almost incredulously, it featured a paper by Roger Daniels, who is now in his late 80s.  At the other end of the table was the daughter of Alan Kraut, a young graduate student who looked like she could be Prof. Daniels’s grandchild—or great grand-child.  Are there any panels at the American Economics Association that could match that demographic spread?
One of the many points Prof. Daniels made was that bad as the Immigration Act was, it allowed for some refugees to gain entrance into the United States.  But in no year during the fascist rampage through Europe, which left Jews and others in a state of peril, did the US State Department ever issue all of the visas it was entitled to.  He lamented, "there was never a New Deal for immigrants.”  Then he turned his attention on Obama.  The president has “kind words for immigrants,” he said, “but he’s become the deporter-in-chief, and is on track to deport more immigrants by the end of his term than all previous presidents combined.”
Linda Kerber, who’s doing a book on stateless peoples, noted that there are some twelve million stateless people in the world today.  That led her to the observation that the 14th Amendment guarantees due process to all persons, not citizens, something she said Rand Paul needs to be reminded of.  She implored teachers in the audience—and the country—to teach about the 14 th Amendment.  “Make your students memorize the first section,” she implored the audience.  Here’s her case for doing it:
In the audience was Alan Kraut, himself an expert on immigration.  From a distance he and many others at the convention looked like military war heroes at an American Legion event, their chests covered in badges supplied by the OAH, which went badge crazy this year. 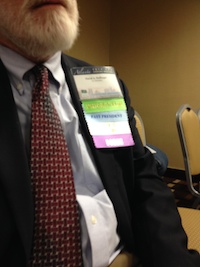 Speaking of memorable moments, there was a scene Saturday that could have come right out of a Woody Allen movie.  At one point at the panel commemorating the work of Edmund Morgan a speaker alluded to the work of Michael O’Malley and began to discuss it.  From the audience came a booming voice.  It was Michael O’Malley himself, playing Marshall McLuhan.  “I’m Mike O’Malley,”  he said, startling the speaker, for whom Michael O’Malley was a footnote not a man.
Another memory of the week involves technology.  We may now carry iPads and tweet and post to Facebook, but we’re still having trouble with our good old cell phones.  Beep.  Buzz. Brrrp.  Almost every panel somebody’s phone went off.  One even went off during Prof. Kraut’s presidential address.  It’s the twenty-first century’s idea of comic relief.  The look of horror that crosses the faces of the offenders is usually precious.
And as long as we’re talking about technology, it’s worth noting that while old Roger Daniels had trouble with the microphone, he read his paper from an iPad.  (See picture above.)  87 years old or so and using an iPad? Colleagues thirty years younger were mostly relying on pen and paper.
Here, for what it's worth, is our favorite picture of the week.  The historian to whom these shoes belong was typing away furiously on a Mac in the hotel lounge.  Consider it OAH Extreme! 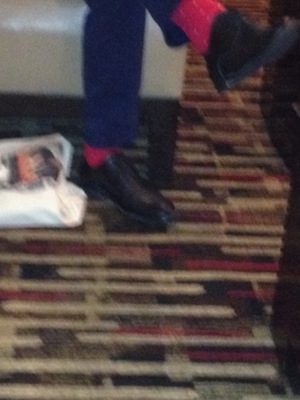 Finally, here are the videos that have drawn the most attention:
#1 The New President of the OAH Explains Why Next Year's Convention Is About Taboos (Interview with Patricia Limerick)