Eric Burns is a former correspondent for NBC News and the TODAY Show. For ten years he was the host of the top-rated “Fox News Watch,” and he has won an Emmy for media criticism. He is the author of several books including 1920: The Year that Made the Decade Roar, and Infamous Scribblers. His latest book is The Golden Lad: The Haunting Story of Quentin and Theodore Roosevelt (Pegasus, 2016). 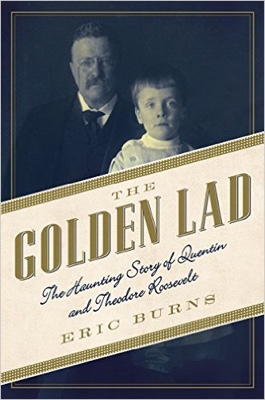 In the past two decades, more books have been written about Theodore Roosevelt than about any other American president. He outnumbers his mates on Mount Rushmore, outnumbers such later chief executives as Reagan, Clinton and either Bush. Or even both of them.

The reason is simple. Roosevelt held more important governmental offices than anyone else who ever ascended to the White House---and he made headlines by raising hell in all of them.

*Assistant Secretary of the Navy: Almost started a war when his boss took a vacation.

*New York City Police Commissioner: Went on famed “midnight raids” to spy on his cops, making sure they were not toying with prostitutes, collecting graft from low-rent criminals, taking naps in secret corners of the city.

*Governor of the state of New York: Drove “Boss” Platt to apoplexy by refusing to play along with the spoils system. Drove others to similar distress by constantly trying to make foreign policy rather than New York policy.

*Vice president of the United States: Took issue with President McKinley on a number of issues, including governance of the Philippines.

*President of the United States: Where does one begin? With trust-busting? His intervention in the coal strike? His arrogating to the federal government control of railroad rates? His support of the Pure Food and Drug Act? His zeal for conservation? The arrogance of the Great White Fleet?

And Roosevelt rose hell to its highest peak after leaving the White House, when he decided to wanted to reclaim the presidency after all. Discovering that his hand-picked successor, President William Howard Taft, had cheated him out of delegates at the Republican National Convention of 1912, Roosevelt joined forces with the Progressives and ran as a third-party candidate, changing the course of American history evermore by assuring that Roosevelt and Taft would both lose by splitting the Republican vote, and Woodrow Wilson, whom Roosevelt had discussed as a “molly-coddle pacifist,” into the nation’s highest office.

But Theodore was not done making headlines yet. By the time Wilson had been inaugurated, Roosevelt was in Africa on a year-long safari, he and his fellow gunsmen bringing down literally thousands of specimens,

which they shipped to the Smithsonian and the Museum of Natural History. How many of the animals Roosevelt actually slew himself is not known, but the number was far more than could be expected from a man with one eye. Yes, one eye! Following a boxing match with a soldier during his White House days, Roosevelt was irreparably damaged by a fist to the orb. But he made certain that his foe, a lowly soldier who almost fainted when he learned what he had done, was never punished or even identified. To Roosevelt, that would have been poor sportsmanship.

Such a man. Such a life. Such a story.

There is a another story about Theodore Roosevelt that almost no one knows. It is mentioned in biographies about him, but never in the kind of detail it deserves. It is not a political story. It is a personal story. It is a parental story. And so it is a story that, in my opinion, has more relevance to the average reader than any of the more commonly known incidents in Roosevelt’s life. Yet the average reader knows little about the haunting

circumstances between father and son, and virtually none knows the entire tale.

The three most salient facts of my book are as follows:

● Theodore Roosevelt was the most bellicose man ever to serve as president of the United States. As I wrote: “It was 1897, it was time. Actually, for Theodore Roosevelt it was past time. He wanted the Spanish-American War to begin. He wanted any war to begin. He believed in war. It was like eating the right foods, getting enough rest, enough exercise. Yes, that most of all: exercise---and Roosevelt more than most people knew the value of exercise.”

● Theodore Roosevelt was the best parent ever to serve as president of the United States. As I wrote: “‘I love all these children, Theodore told a newspaper reporter on one occasion. Continuing, he said that he had ‘great fun with them and am touched by the way in which they feel that I am their special friend, champion and companion.’

“He played hide-and-seek with them. He was always ‘It’ in games of tag. He played scary-bear with them, comically growling as he chased them around either the White House or Sagamore. He wrestled with them.

“And more than anything else, he had pillow fights with them. They swung the pillows at each other, bashed each other, shrieking with delight.

. . . Pillow-fighting was to the Roosevelts of Sagamore Hill what touch football would be to the Kennedy’s of Hyannisport.”

● Theodore Roosevelt might have loved all his children, but his favorite was his youngest, Quentin, born just as his father was at the peak of his froth for the Spanish-American War. The Golden Lad reveals Theodore looking at his infant for the first time. As I wrote: “[Roosevelt] nodded and the wet nurse handed him over, watching as the child quieted himself a little and settled into his father’s embrace, so gentle for such a robust man. He rocked little Quentin back and forth in his arms. He spoke to him in nonsense syllables. He held up his thumb and wrapped the baby’s tiny fingers partway around it. When he let go, the fingers stayed in place. According to Sagamore lore, something seemed to pass between father and son in that moment, and it went beyond merely a parent’s joy and a newborn’s motor reflexes. As was written by the picture editor Joan Paterson Kerr, ‘A baby’s hand, [Theodore] thought, was the most beautiful of God’s creations.’ ”

These three story elements, Roosevelt’s love of war, his love for his children, and his special love for the youngest, were eventually to combine in a manner that persuaded me to use the word “haunting” in the book’s sub-title.

Theodore Roosevelt’s life is a mural—so many events, so much canvas to cover. The Golden Lad is but a small section of the painting, but in my eye, it sits in the center, and it is from this position in the enormous work that all the enormity radiates. Take away The Golden Lad and the whole mural, despite its wealth of detail, loses its breadth of meaning, its core; it becomes disconnected. My book is unusual in the Roosevelt canon, a narrow volume about this broadest of men. But I believe that without my few dabs of paint in the middle, all that surrounds it, despite its size, would be incomplete.