by Louis Ferleger and Matthew Lavallee 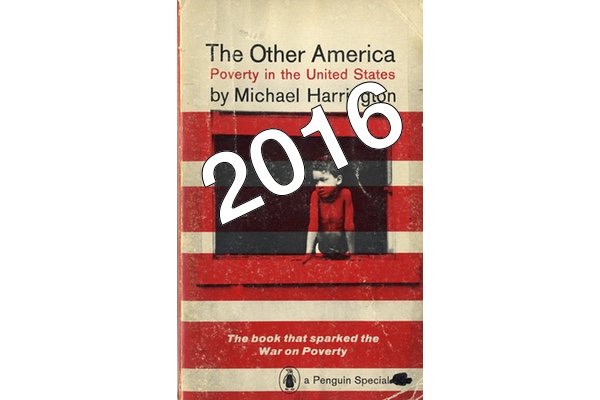 As the United States approached its bicentennial in the 1970s, Michael Harrington, who published a highly-influential study of American poverty titled The Other America: Poverty in the United States, made a prediction: “On July 4, 1976, when the nation celebrates its two hundredth birthday, there will probably be more ghost towns in the cities.” He was right, and these ghost towns persist today, filled with millions of Americans who struggle to find jobs and make ends meet.

The persistence of economic hardship might explain why Harrington’s work retains its stature as one of the most important books of the twentieth century. Time magazine, for example, included it among works such as Sigmund Freud’s Civilization and Its Discontents and Alexander Solzhenitsyn’s The Gulag Archipelago in a “Required Reading” list of the twentieth century’s ten most influential books in 1999 and again in 2011 on its list of the “All-Time 100 Nonfiction Books,” alongside titles by John Maynard Keynes, Reinhold Neibuhr, and Hannah Arendt.

First published in 1962, Harrington’s work focused on the invisibility of pervasive poverty in mid-century America. While most Americans understood the postwar period as a prosperous time when ordinary Americans bought more cars and new televisions, Harrington pointed out that this wasn’t true for all, especially the disabled, rural Americans, the elderly, and African Americans. “The Other America, the America of poverty,” he wrote, “is hidden today in a way that it never was before.”

Upon publication The Other America quickly garnered accolades, influenced policy debates, and reshaped opinion. “It is an excellent book,” wrote the New Yorker, “and a most important one.” Some suggest that it impressed John F. Kennedy and provided some of the impetus for Lyndon Johnson’s War on Poverty. Of course poverty and unemployment existed before, but according to Harrington it was more visible during the Great Depression than in 1960. Building on the themes of John Kenneth Galbraith’s 1958 work The Affluent Society, Harrington argued that because the postwar economic boom brought prosperity to many, those who remained mired in poverty became “the first minority poor in history, the first poor not to be seen, the first poor that the politicians could leave alone.”

Harrington’s work also stood out for other reasons.  He statistically documented the extent of poverty, but also sought to show “the faces behind the statistics” by describing the lives and experiences of the poor that illustrated poverty’s daily consequences.  He noted that the plight of the poor had not caught the attention of Americans and he wanted to bring to light the contours of this American problem. The middle class, he observed, was ignoring the poverty around them. “It is a blow to reform and the political hopes of the poor,” he wrote, “that the middle class no longer understands that poverty exists … the poor are losing their links with the great world.” Additionally, Harrington wondered if even some members of the middle class would soon see their jobs and incomes decline or even disappear—as well as their aspirations—and join the ranks of the poor.

With the decline of the middle class a familiar trope in American politics today, Harrington looks more and more prophetic. Presidential candidates declare that “the middle class needs a raise” or target the discontented workers who have seen jobs and their middle-class standard of living decline. But in contrast to Harrington’s time the problem is not just poverty, but the disappearance of good jobs and the return of inequality to Gilded Age-levels. These conditions coexist with the prosperity enjoyed by some in the post-recession economy, much like the poverty Harrington observed amidst an affluent society. Today’s other America struggles to be seen because poverty and low incomes are geographically distributed in some places that are conventionally viewed as prosperous, and because our methods of measuring economic conditions fail to capture the plight of many.

For example, Massachusetts is viewed as a prosperous state relative to the rest of the United States, but this isn’t true for a number of the state’s communities. Although Boston and its surrounding towns have unemployment rates lower than the state average, away from Boston the situation is much different in the state’s formerly industrial cities. In some of these cities, such as Lawrence, Springfield, New Bedford, and Fall River, the unemployment rate remains much higher. Workers in communities farther from Boston also earn much lower wages. Last year, the Boston Globereported that away from Greater Boston, average wages in most counties were below the national average and in one county in western Massachusetts, average wages were $40,000 less than near Boston.

The other veil across economic hardship today might be the way we measure employment. Since the economic crisis, the United States has seen strong monthly job growth and the unemployment rate has fallen considerably. Yet unemployment rates do not reflect that millions of working-age Americans, discouraged by the lack of opportunities for rewarding employment, have dropped out of the labor market – that is, they neither hold jobs nor are looking for one. This affects the unemployment rate because those who have dropped out of the labor market do not count as unemployed. Since the start of the economic crisis, the labor force participation rate has dropped to 62.6 percent, the lowest level since the 1970s. The drop was especially steep for men with a high school degree or less. In 1964, 97 percent of men between 25 and 54 years old with a high school degree or less were working or seeking work, but now that has dropped to 83 percent. This might be due to the decline of manufacturing eliminating many stable and rewarding employment opportunities for this group of workers. Nevertheless it indicates that a low unemployment rate might not be as clear an indicator of prosperity as it seems. Because this group of the unemployed is not counted in the unemployment statistics, they remain largely invisible statistically, not unlike a scenario Harrington would have described a half-century ago.

Harrington recognized the difficulty of solving the poverty problem. He noted in his 1971 introduction to a new edition of The Other America that, despite Lyndon Johnson’s declaration of an “unconditional war” on poverty, the number of poor Americans had not declined significantly. The issue of poverty, however, was now a focus of many public policy debates. But, sadly, he noted that the same groups who he identified in 1962 still remained poor in 1971. Moreover, he thought the number measured in the seventies undercounted the true extent of poverty which should have included the near-poor – perhaps not unlike today’s unemployment statistics that don’t paint a full picture of socioeconomic conditions.

What does the continued praise for Harrington’s work tell us about economic hardship today? Distressed zones from Massachusetts to California remain invisible, while official statistics perpetuate the illusion that all are reaping the benefits of the new economy. In the 1970s Harrington reiterated his call for a commitment to more social investment to reduce poverty and stated that “America must understand one crucial proposition: that it is in the interest of the entire society to end the outrage of the other America.” And today it remains in society’s interest to reduce unemployment – including the kind that doesn’t appear in official statistics – which has led to the persistence of hardship in the other America.