Bob Miller teaches history at University of Cincinnati-Clermont College and is actively working on a biography of Raymond Walters. 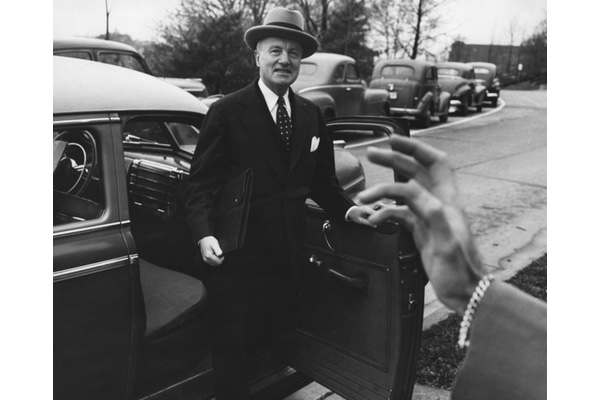 In my research of the American experience during World War II, I have never been much of a fan of the term popularized by Tom Brokaw, which refers to the collective experience of those who lived through the war era as “the greatest generation.” For the past two years, I have been researching the life of Raymond Walters, the longest tenured president at the University of Cincinnati (1932-55). His diaries, that his family donated to the University of Cincinnati Archives in the 1970s, offer some illuminating lessons about partisanship and patriotism during the Age of Roosevelt.

Walters worked for two different Philadelphia newspapers before settling into a career in higher education at Swarthmore College. He began writing his diary entries in 1925. He was an avid follower and consumer of news and current events, and took special interest in politics and world affairs. He consistently voted Republican. Walters voted for Herbert Hoover and considered him in many ways to be the ideal candidate. He continued to support Hoover even as the Great Depression worsened. When Franklin Roosevelt was elected in 1932, the normally optimistic Walters, who was on an academic inspection of Iowa State University, grew so depressed and despondent that he found fault in every aspect of his day. He grumbled about not packing the right overcoat for suddenly cold weather; he grumbled about the poor quality of papers presented at a meeting; he even complained about a dreary ceremony commemorating the observance of Armistice Day. While he stated that the entire ceremony was “cheerless, just like the times,” he went on to restore a glimmer of optimism by adding that “the stars and stripes were flying so we must take courage and resolve to make the flag symbolize a better country."

During the 1930s, Walters developed a complex set of attitudes about the new President. The old English professor in Walters appreciated and admired Roosevelt’s ability to deliver a rousing speech, qualities that Hoover surely did not possess. Walters both listened to important fireside chats on the radio and then poured over the analysis of those speeches in newspapers the following day. While he appreciated FDR’s rhetoric, it didn’t take long for Walters to oppose the New Deal. Walters disagreed with the centralizing tendencies of FDR’s economic recovery policies and came to view the president as a dangerous and power hungry demagogue.

In 1936 he actively supported the candidacy of Governor Alf Landon. He cast an absentee ballot before heading to Austin, Texas on business, on Election Day. From a train he expressed his disappointment: “The sky is overcast. I am not feeling cheerful. It isn't the weather, however, but the morning newspaper reports indicating a Roosevelt victory. I fear the President will consider himself endorsed in policies which, as a liberal, I consider dangerous for America. The argument that great social good can be more quickly accomplished by a strong central government does not impress me. The same centralization can quickly wipe out the gains which liberalism has slowly built up.”

Walters initially backed his fellow Ohioan and friend Senator Robert A. Taft in the latter’s efforts to capture the Republican presidential nomination in 1940. Just before the party convention, Indiana industrialist and political newcomer Wendell Willkie burst on the scene. Willkie’s candidacy quickly captured and ignited the interests of grass roots supporters including Walters. Tuning in to the radio broadcast of Willkie’s nomination, Walters took special delight when delegates from Pennsylvania, his home state of origin, made the nomination official, and the votes of Ohio, his adopted state, made the nomination unanimous. Walters called the moment “a triumph for representative democracy.” That sense of euphoria came to a crashing halt, of course, when FDR won an unprecedented third re-election bid. A morose Walters could not contain his disgust with the decision of the American people to give “the third term candidate,” as he called Roosevelt, another four years.

Despite his disappointments, which were very real, Walters knew and understood that even greater threats to American democracy and its representative government emanated from Hitler’s Germany. War in Europe had been raging for over a year by the time American voters went to the polls in 1940. Under Roosevelt’s leadership, the country began to mobilize its resources for the day it might find itself engaged in the conflict. Walters, the old anti-New Dealer, found himself supporting the President’s actions, from the passage of the Selective Service Act, to the President’s Arsenal of Democracy Speech (Walters hailed it as “an excellent exposition of the situation, admirably delivered"), to the passage of the Lend Lease Act. When America did enter the war, the partisanship that had defined Walters core beliefs during the 1930s bowed to the higher order of patriotism.

Walters worked with federal officials to transform the University of Cincinnati into a training camp for aviators. Moreover, he supported the war effort in the Queen City as one of three citizen judges on the Alien Enemy Hearing Board, in which he determined whether persons of Italian and German descent should be interned or not. He also made almost weekly trips to the nation’s capital to coordinate the efforts of higher education to support the war effort.

One of the hallmarks of American democracy, especially when it was engaged in a total war against the forces of fascism, was the cherished belief in observing elections, even in wartime. Walters’ sense of wartime patriotism allowed him to maintain his partisan views. Predictably, he supported the candidacy of New York Governor Thomas Dewey in 1944, fervently hoping that a new man would become commander-in-chief. Yet, compared to his reaction four years earlier, when Walters seemed ready to hurl himself under a bus, the diarist seemed at peace with the election results. He even made a joke about the losing tradition of the University of Cincinnati Bearcats football team, comparing it to his inability to vote for the winning candidate. Walters observed wryly: “I've been in the minority so much of my life, attended a college which lost so persistently at football that I have become a hard old rubber ball. I've already bounced back.”

So, maybe Brokaw has managed to get a truer read on 1940s America than I have been willing to admit previously. The lesson from Walters’s diaries is simple, obvious, and direct: in the face of true national peril, patriotism and the willingness to work towards the greater good trumped partisanship. At least that was the case for Walters and his contemporaries.