Dr. Or Rosenboim is a Research Fellow at Queens’ College, Cambridge, and the author of ‘The Emergence of Globalism: Visions of World Order in Britain and The United States, 1939-1950’ (Princeton University Press, 2017). 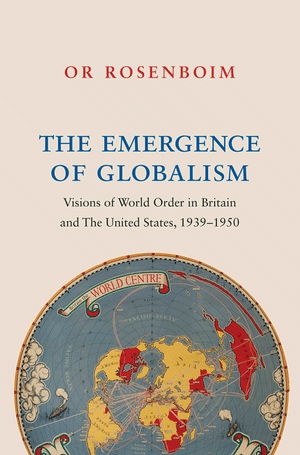 “We will no longer surrender this country or its people to the false song of globalism,” Donald Trump asserted during a speech in Washington, in April 2016. After his election as President of the United States, Trump repeated his attacks on globalism with a renewed energy to the extent that his followers now use “globalist” as a slur.

On the American right-wing website Breitbart, the pseudonymous writer Virgil characterized the “old globalist vision” as a “gospel,” a “new kind of religious faith” based on the idea that in a “smaller” and interconnected world, all borders, states and religions should be abolished. Yet, as Virgil argues, the globalist creation of elitists’ “murky transnational enterprises” which, combined with the “neo-Cobdenite” ideology of international free trade resulted in a “democracy deficit.”

The current calls for a return to nationalism depict the alternative ideology – globalism – as a liberal, capitalist and anti-democratic ethos. But that’s a false narrative, as I explain in my book, The Emergence of Globalism.

Ever since the outbreak of the Second World War, American, British, and émigré intellectuals had diagnosed the emergence of globalism as the defining condition of the post-war era. Raymond Aron, David Mitrany, Owen Lattimore, Nicholas Spykman, Barbara Wootton, Lionel Curtis, Clarence Streit, Lionel Robbins, Friedrich Hayek, Charles E. Merriam, Michael Polanyi, Richard McKeon, Jacques Maritain and Luigi Sturzo were among the global thinkers who insisted that politics should follow technology and become global too. Globalism reflects an awareness of the political significance of the globe as a unitary whole made of interconnected, diverse political units. The recognition of the world’s “oneness” did not necessarily imply political monism. Rather, globalist thinkers sought to find an equilibrium between unity and diversity by rethinking the motivations for cooperation and conflict.

Reflecting on the demise of global history, Jeremy Adelman describes it as an approach to the past transcending national histories and aiming to produce global citizens. Global history embodies, for him, a political project to outline a world where borders mattered less than encounters, connections and interdependence. Yet the downfall of global history cannot be blamed only on political changes: “global chroniclers” were too limited by the boundaries of the English language, and revered integration and agreement while ignoring separation and discord. Globalism should come to terms with the cost and not only the bounty of interdependence.

For mid-century thinkers about the global sphere, this interdependence not signify an uncritical abandonment of all constituent elements of politics in favor of a world polity. States, empires, federations, non-state communities, and supranational organizations were reimagined and redefined—but not necessarily abolished—before they could acquire a new place in the modern, global world.

Globalism was invoked to outline a different political order than the international, transnational, and cosmopolitan spaces of politics. The international space of politics is made of the relations that occur between nations, or sovereign states. The transnational space stretches beyond national boundaries to explore interconnections across borders, without undermining the significance of national communities and states. Cosmopolitanism, by contrast, typically assumes that all humans belong to a world community and should orient their political and moral allegiances accordingly.

As today, in the 1940s, there was no one global ideology, no single definition of the global political sphere. Yet the globalist approach to politics had three important features.

First, globalism offered an alternative to empire. The globalists accepted the decline of the European imperial world order. After the war, some, like Owen Lattimore, feared the imperial rise of the United States and Soviet Russia, and others, like Barbara Wootton were wary about the cultural and political legacy of empire. Globalism offered a multi-layered rather than hierarchical principle of world order, based on diverse units: states federations, regional unions, transnational communities, and international organizations.

Even those who built on the experience of empire, like Clarence Streit or Lionel Curtis, proposed a post-imperial federation aimed at the common good. Imperial domination and exploitation would be banished. Thus, for Curtis, the British Empire should be transformed into a global commonwealth, which would advance the common good as “simply the sermon on the mount translated into political terms.” Yet other globalists, like the members of Federal Union, criticized his proposals as an ideological continuation of the imperial world order, and demanded a more decisive turn away from empire and toward democracy and autonomy.

The second constitutive element of the global ideologies was a concern for the future of democracy. During and after the war, domestic and international threats to democracy loomed large. The global perspective on democracy envisaged regional, transnational, federal, or world institutions, in addition to the territorial state. Some mid-century commentators thought domestic democracy was not enough, and demanded that international relations would be guided by democratic principles as well, such as equality, inclusion in the political community, and participation.

Moreover, no one model of democracy was deemed fit for all. The challenge of creating a pluralist yet coherent global democratic order, of globalizing its political culture and institutions, required a new conception of modernity. For some mid-century thinkers, the solution would be to draw on a wider range of sources that represented the unifying elements of humanity. The conceptual toolbox of modern global democracy included not only rationality and scientific progress but also morality, faith, myth, and religion, which attained an increasingly greater importance for mid-century planners of world order.

Third, mid-century globalism was anchored in a pluralistic conception of world order. The existing condition of political and moral diversity should, for these globalists, acquire a normative expression. States could not claim sole authority over individuals: other associations, groups, and organizations provided important opportunities to interact and construct political spaces to advance political, social, economic and cultural interests. Pluralism was not a source of political and social chaos, but a form of global order.

There were evident tensions between the pluralistic approach and the support for democracy. It was hard to insist that democracy was better than any other government, while flying the pluralist flag. Thus, globalism sometimes collapsed into a simple defense of Western moral and political values.

The multifaceted discourse of world order in the 1940s reveals that the term globalism cannot be reduced to the antithesis of nationalism. Globalism was more than the attempt to bring down national borders and cultural divides. While champions of globalism tended to highlight the importance of political interconnectedness, they did not necessarily want the dissolution of states. Rather, globalist thinkers challenged the idea that national, regional or international political decisions could be detached from global implications and causes.

By rejecting globalism, Donald Trump has provided an opportunity for a reflection on globalism as a political project. Yet such reflection should begin from a historical assessment of the concept’s diverse meanings and uses. A clear understanding of the past of the globalist ideology can help underline its limits and its potential contribution to political debates today.