Laurence Jurdem is an independent scholar who received his Ph.D. in U.S. History from Fordham University. For more information, please visit the author's website laurencejurdem.com 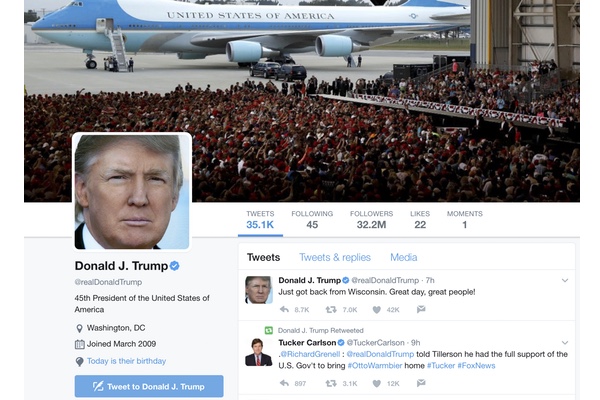 When historians finally write their analysis of the Trump presidency, Donald Trump’s active use of Twitter will play a significant factor in helping us chronicle the day to day activities of his time as Commander in Chief. One could say that the president’s reliance on the social media platform, serves as a type of daily diary, allowing Mr. Trump to give unfiltered and at times untethered views about the issues and personalities of the day.

During the 2016 campaign, Twitter was a powerful tool for Mr. Trump. The former real estate developer, effectively used his 140 character posts to not only colorfully defeat his GOP primary opponents but also to effectively manipulate and at times circumvent the mainstream media to reach those supporters the president argued had been abandoned by America’s political elites.

But since taking the oath of office this past January, Twitter has not served the president well. Mr. Trump’s tirade against the nations judiciary over the suspension of his immigration ban as well as his insensitive comments towards London Mayor Sadiq Khan, have caused those on the Right including the Wall Street Journal, to argue that the president’s cyber rants are inhibiting his legislative agenda. Many White House advisors have hoped that Mr. Trump will either cease his tweeting or at least take a few moments to consider the ramifications of his message before sending it. The prospect seems unlikely. However, if the president wants to remove some of the toxicity that has defined his tenure thus far, he should examine the record of a number of his predecessors, who were successful in finding various means to privately express their frustrations over the public realities of their office. These solutions included keeping a diary or expressing their unvarnished views and opinions in detailed letters to family and friends.

While Abraham Lincoln was one of our most oratorically gifted presidents, the former lawyer from Illinois was not beyond using the power of his pen to express his frustrations when he believed one of his generals was not doing the utmost to defeat a confederate opponent. In July, 1863, following General George Meade’s victory at Gettysburg, Lincoln learned that following the battle, Meade had missed the chance to capture the Army of Northern Virginia, under the command of General Robert E Lee. Meade’s bungled opportunity made the president so angry, he preceded to sit down and write a letter to his commander: “You had at least twenty thousand veteran troops directly with you, and yet … you stood and let … the enemy move away at his leisure without attacking him,” the president wrote. The missive was a blistering critique of Meade’s strategic capabilities and an indictment of his failure to lead men on the field of battle. While Lincoln was clearly livid with the general’s performance, the president knew better than to include the comments in a letter. Lincoln, whose thoughtfulness was a key trademark of his presidency, understood the importance of keeping an even temperament during a time of great crises. Had the note to Meade been made public, the nation would not only have been given the impression that the Union Army was in chaos, but that Lincoln was cracking under the strain of the office. As Doris Kearns Godwin has stated, despite moments when the tensions of the position were overwhelming, the nation’s 16th president was able to utilize what he liked to call “hot letters” as a means of venting his frustrations while also hoping that the exercise would “cool him down.”

President Harry Truman was also not immune from allowing the daily pressures of the Oval Office to get under his skin. In describing Truman’s temper, David McCullough wrote that “while he might be an easygoing fellow, he was also no one to trifle with.” On more than one occasion the president’s temper was in public view. When a White House reporter informed Truman that he had been unaware of an upcoming cabinet meeting, Truman responded: “I can hold a cabinet meeting whenever I choose. I don’t have to tell you.” According to McCullough, Truman was consistently frustrated with the business of governing. The president saw many around him as unhelpful, condescending and obsessed with their own self-importance. But while these tensions continued to aggravate Truman, he was able to find a number of ways of containing his irritations. These included sharing his strong opinions in private letters to his family, writing in his daily diary or making personal observations on a series of appointment sheets. In one example, next to a scheduled meeting with Bernard Baruch, Truman’s representative to the Atomic Energy Commission, the president wrote of the wealthy financier: “wanting to run the world, the moon and maybe Jupiter.” On another occurrence when Truman was annoyed by the activities of the Washington establishment, the president used a letter to his mother to describe his frustrations with large labor unions. “Big money has too much power and so have the big unions – both are riding to a fall because I like neither,” he wrote Martha Truman.

Of more recent note, Jon Meacham has revealed that beginning in the 1970s, President George H.W. Bush frequently made use of a tape-recorded diary that helped him deal with the frustrations experienced in the combative arena of national politics and diplomacy. The comments, especially during his presidency, were effective in helping Bush contain his anger with the often-challenging relationships all presidents have with the media and those of the political class. During his long career, Bush was known for his even temper and congenial personality. However, one can see in these unvarnished comments, a man who could be highly critical of members of the fourth estate and others who treated he and members of his administration disrespectfully. Evidence of Mr. Bush’s outspokenness, is illustrated by his colorful characterization of 1988 opponent, Michael Dukakis who the then vice president described as “a little midget nerd,” or the low regard Bush expressed for members of his own party who sought to exploit rumors that former Speaker of the House Tom Foley was homosexual. “That kind of gut shot is so cheap I can’t believe it,” Bush commented in May, 1989.

These journals and correspondence allow historians to gain a unique insight into the day to day toll the rigors of the presidency can have on a particular personality. It is also possible to demonstrate that those presidents who kept diaries or wrote letters saw the literary process as a form of therapy, a means of using the written or spoken word to help them to not only clear their head after long days of political battle, but to regain their composure in order to refocus their attention on the important business at hand. President Trump has thus far been unwilling to look to the lessons of history as a means of ending the chaos that has engulfed his administration. Canceling his Twitter account might be a good start.