If Jeff Sessions Is Serious About Cracking Down on Immigration Law Violators, He’s Going to Have to Arrest Millions of American Citizens

Robert Brent Toplin is Professor Emeritus at the University of North Carolina, Wilmington, and he was also a professor at Denison University. Toplin now lives in Charlottesville, where he has taught occasional courses at the University of Virginia. He has published several books about history, film and politics. Contact: rt2b@virginia.edu 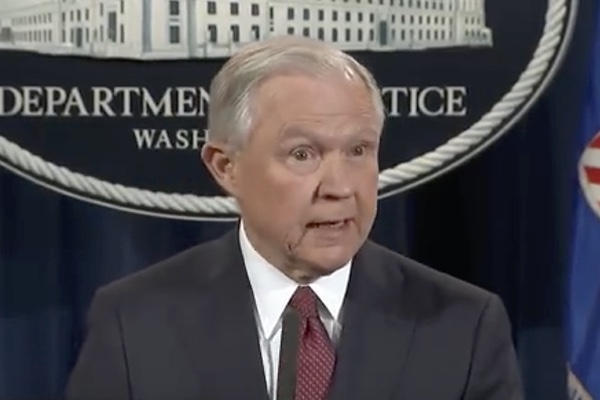 When President Donald Trump and Attorney General Jeff Sessions explained why they were revoking the DACA program that gave temporary protection to over 800,000 undocumented young immigrants that were brought to America by their parents, they hammered a point that other critics of DACA have echoed in the national media. Trump and Sessions argued that these minors were in the United States illegally. They neglected, however, the illegal behavior by millions of American citizens who employed their parents. The hiring of undocumented immigrants did not just involve violations of the law by large businesses. Millions of individuals in the United States employed undocumented workers to repair their roofs, cut their lawns, and clean their houses. Those citizens engaged in unlawful behavior. Politicians and pundits have given almost exclusive attention on the approximately eleven million “illegal” immigrants in the country and the 800,000 immigrant minors that may lose protection from DACA. It is time to recognize that many other “illegals” were involved in this case, U.S. citizens who eagerly employed undocumented workers.

Attorney General Jeff Sessions placed the legal issue front and center when defending his call to end Deferred Action for Childhood Arrivals (DACA). “As Attorney General,” explained Sessions, “it is my duty to ensure that the laws of the United States are enforced and that the Constitutional order is upheld.” President Donald Trump argued that change was necessary “because we are a nation of laws.” When discussing the subject on CNN, Ed Martin, a pro-Trump commentator, made a related point. Immigrants “broke the law,” said Martin. “They are lawbreakers.”

In recent decades, the federal government tried to crack down on employers that hired undocumented workers. The Immigration Reform Control Act of 1986 made it illegal to hire or recruit illegal immigrants knowingly. Nevertheless, employers, large and small, knowingly or neglectfully, violated the rules. When members of Congress advocated stricter workplace enforcement, business owners objected strongly. Political leaders in Washington discovered it was easier to increase funding for border security than to fund a more robust monitoring of hiring practices. During the administrations of Presidents Bill Clinton and Barack Obama, the federal government improved surveillance of employment. A system called E-Verify simplified an employer’s search for information about prospective employees. But a 2013 report from the Migration Policy Institute revealed that less than 10% of seven million or more employers had enrolled in E-Verify. Some states responded to the problem with legislation that required use of E-Verify.

The parents of minors affected by DACA migrated to the United States because they found plenty of jobs in the booming economy. An article in the Texas Tribune (December 16, 2016) identified the situation in an informative headline: “In Texas, Undocumented Immigrants Have No Shortage of Work.” Texans readily hired immigrants for labor at distribution centers, in fast food service, in the hospitality and agricultural industries, and numerous other kinds of work. The employment scene in Texas did not simply involve a group of poor law violators seeking jobs from well-meaning families and company managers that were determined to obey the law. Everyone involved, citizen and non-citizen, participated in the ruse. All benefited.

Critics of the recent decision by President Trump and Attorney General Sessions need to move beyond references to the hardships “Dreamers” will face if DACA is destroyed or to stressing important contributions undocumented immigrants have made to the U.S. economy and military (and their heroic assistance to families endangered by Hurricane Harvey). Defenders of immigrants need to challenge the Trump Administration’s deceiving arguments about upholding the law and requiring “illegals” to leave the country. If the Administration is to stand on principle, it needs to deal with the behavior of millions of Americans who violated the nation’s immigration laws with a wink and a smile.