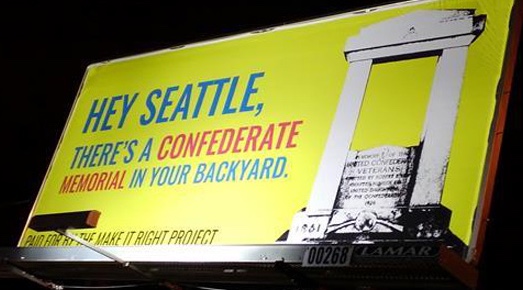 A group that advocates for the removal Confederate monuments in cities across the country is turning its attention to Seattle.

The Make It Right Project recently put up a billboard in Capitol Hill, reminding Seattleites of the presence of a Confederate memorial right in its backyard. That memorial can be found in Lakeview Cemetery, also the home of Bruce Lee’s grave site, and has stood since 1926.

Make It Right was launched in June 2018, and has since made it its personal mission to get Confederate monuments removed nationwide.

The organization targets 10 cities across the country with monuments they deem problematic. Seattle holds the dubious distinction of being the only West Coast city included on that list.

Read entire article at My Northwest
comments powered by Disqus