Will We all Survive by the Skin of Our Teeth? 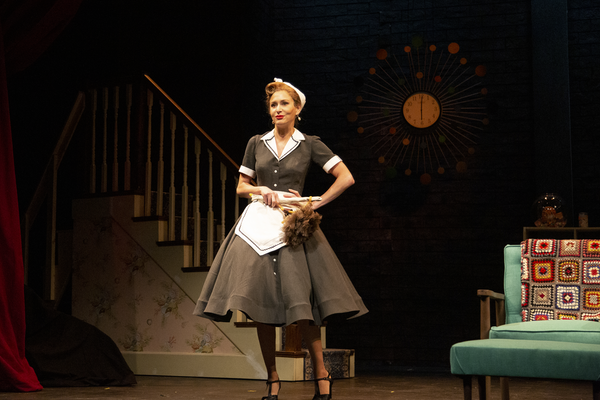 In 1942, just after the start of World War II, playwright Thornton Wilder, who had written the classic Our Town just five years earlier, wrote The Skin of our Teeth. It was very unusual then and pretty unusual now. The play is the story of a family of mammals, that has evolved into people, over 5,000 years. They are the Antrobuses, a family of mom and dad, who do not get along, and a daughter and son who is rebel. The dad, George, is the President of the mammal society and has been since the days of Noah. The family has dealt with tragedy for all those centuries and now they are smacked with World War II.

The play, that just opened at the Fitzpatrick Theater, Berkshire Theater Group, in Stockbridge, Massachusetts, begins with the family living in the Ice Age and surrounded by large mammoths and other ancient animals. Act one tries to show that the mammals were more civilized than people. It also sets up the idea that this is a unique play, a bit weird, maybe, and, in the end, the story not just of humankind, particularly Americans, but of what will happen to humankind if it does not change its ways (as if we are EVER going to change our ways).

It is a strange look at the world, very surrealistic, and something you would expect to be written today, and not in 1942. In it, playwright Wilder shows an amazing vison of the future. Much of it happened, although vaguely, just the way he predicted.

Despite its odd structure and tromping, stomping, mammoths, who wander about sort of half off the stage, their roars frightening everybody, The Skin of Our Teeth is a colossal success, a perceptive look back to the past and to the future and from post-World War II life to the present day and to our future, too.

In the beginning of the story, someone reminds the audience that Americans got through the Depression “by the skin of our teeth” and that we can get through anything, at that time referring to the war. You could jump into 1942’s future, though, and look at Watergate, Vietnam, the Civil Rights movement and even today’s border crisis to see how Americans did get through everything, and in much the way Wilder predicted. Oh, we’ve had our and bruises, but we made it so far. Wilder then adds that if we have gotten this far, we can get farther. He’s right.

Following the sci-fi start of the show in act one, the tale shifts to contemporary 1942 at America’s most glamourous resort, Atlantic City (that has fallen into gambling disrepair over the last forty years). George and his wife are the leaders of a mammal’s society but have their domestic problems, and their two troublesome teenagers (teenagers were troublesome 5,000 years ago and remain so today, and will be a pain 5,000 years from now).  Middle-aged George, married so long, thinks about having a fling with Miss Atlantic City, his kids rebel and his wife seems fed up with everything and everybody. They tell people that when the big machine on stage turns red the world will be coming to an end. It does and the world seems to be rushing that way, given the war, but it survives. In act three, in a dazzling performance by the teenage son Henry, we see the future after World War II and it is not rosy.

The Skin of Our Teeth is not an easy play to stage or watch. At the start of act three, for no reason, the action stops and the stage manager tells us, as part of the play, that actors have become ill and new actors have been put on stage. There is a rehearsal for the new actors. The play then reverts back to form with the newcomers. There are trips to 5,000 years ago, Conventions, beaches, strobe lights, explosions, boardwalks and lots of cantankerous people.

Director David Auburn has done a splendid job of keeping all of this running smoothly in his skilled hands. He also remembers the past warmly but meets the future with open arms and an eager smile, as do the actors. Auburn gets wonderful performances from the entire cast. Particularly good performances are turned in by Danny Johnson as George, Harriet Harris as his wife, Lauren Baez as daughter Sabina, Marcus Gladney Jr. as son Henry, and (delightful) Ariana Venturi as the Antrobus’ maid.  They are surrounded by an ensemble of fine actors.

Will there still be robot calls?

Will there still be 546 candidates in each televised Presidential debate?

Will parents still tell everybody that their kids are the smartest, most athletic and most beautiful people that ever lived?