Holly Jackson on the History Lessons of American Radicals

Kyla Sommers is the editor-in-cheif of the History News Network. 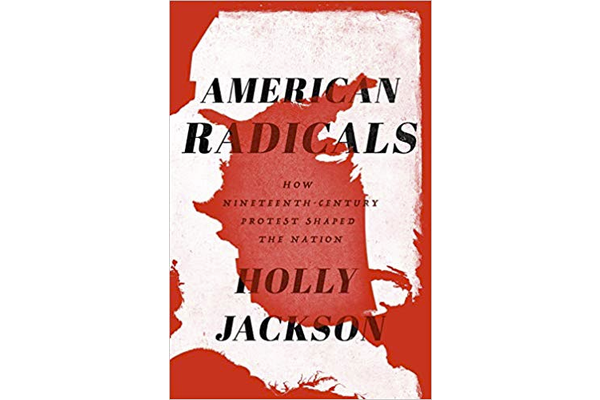 Holly Jackson is an associate professor of English at the University of Massachusetts, Boston. Her writing on U.S. cultural history has appeared in The New York Times, The Washington Post, and The Boston Globe, as well as a number of scholarly venues. She lives in Cambridge, Massachusetts.

Why was this a peak moment of protest in American history?

American Radicals focuses on the period from around 1820 through the end of Reconstruction in 1877, and I’ve tried to show that social justice movements did not simply respond to the volatile political conditions of this time, but played an important role in shaping them. In the antebellum period, the federal government brokered a string of compromises over slavery, aiming to preserve the union between the sections. A critical mass of ordinary Americans taking active measures in opposition to slavery, and this certainly included enslaved people themselves, helped to push the country to its ultimate reckoning with this issue in the Civil War and also intervened in the period of social re-engineering that followed. This was a golden age for multi-issue activists who wanted to interrogate and overturn not only slavery, but also other longstanding forms of oppression that many Americans considered natural, even divinely ordained, including women’s subordination in marriage, prisons, economic inequality, and so on. There were also two major depressions in this period that catalyzed people to think about critically about capitalism and consider alternatives.

What were the tactics/methods of the first American protest movements?

Protest took many forms, ranging from lifestyle choices like veganism and consumer boycotts to strikes and demonstrates, up to attempted coups d’état. Thousands of Americans lived in alternative communities at some point during this period in order to separate their daily lives from a mainstream culture they found objectionable. One subset of abolitionists called the Come-Outers sometimes crashed church services. Free Lovers risked jail time for cohabiting with their partners, or else staged protest weddings. The figures I focus on were particularly invested in the power of the written word to make social change; they published pamphlets and novels and manifestoes, edited radical newspapers and magazines.

What can we learn from the abolitionists and women’s rights activists? How did they work together successfully? What were the limits?

These two movements were richly intertwined and mutually sustaining before the Civil War, which is not to say that activists always worked together across issues in perfect harmony. The strain of activism usually associated with William Lloyd Garrison was controversial even within the abolitionist movement, not only for its anti-government stance, but for its advocacy of women’s equality and public leadership. When a separate women’s rights movement emerged, the personnel was largely drawn from the antislavery community. Frederick Douglass was not only present at the Seneca Falls convention, he convinced the assembly to pursue the goal of women’s suffrage even though most of the women present thought it was too radical.

These collaborations were severely tested after the war. Some women’s rights leaders felt sidelined by the push for black male suffrage. Frances Harper and others advocated for what we would now call an intersectional approach, mindful of multiple social hierarchies at once, but Elizabeth Cady Stanton and Susan B. Anthony turned to racist fear-mongering in their arguments for women’s suffrage.

There are a number of other crucial relationships between the social movements of this period that are not as well known. For example, Stanton credited the utopian socialist Charles Fourier with the dawning of her feminist consciousness. The labor movement and Free Love each overlapped significantly with both antislavery and women’s rights.

What opposition did this era of activists face?

They were regarded by most of their countrymen as dangerous troublemakers and faced virulent opposition from many directions. Mainstream newspapers went far beyond lampooning their countercultural quirks to actively fomenting violence against them. Antislavery activists were assaulted, even murdered. Mobs set fire to their lecture venues. Laws were passed to curtail their right to free speech, including gag rules in the antebellum period and anti-obscenity legislation later in the century aimed at those circulating information about birth control. The book describes two instances in which American presidents deployed military force to crush civilian protests: the first was in Boston in 1854, where 50,000 people had turned out to demand the release of Anthony Burns, a self-emancipated refugee from Virginia, and the second was in Pennsylvania in 1877, when railway workers carried out a massive strike that spread across the country; soldiers killed around a hundred civilians. Americans have always had an ambivalent relationship to protest, despite our revolutionary origins

What does this era tell us about the discrepancy between the ideals and the reality of the United States?

Even though these activists were plugged into international networks and were deeply critical of nationalism, they framed their social justice work specifically as a struggle for American values. Across movements, they called for a “second revolution” that would complete the first, so that the everyday lives of all Americans might finally reflect the ideals of equality and freedom that had never been realized. The Declaration of Independence was a key text for many who wanted to reclaim its power as a radical manifesto and hold Americans to account for their own professed beliefs. It was quoted and reworked extensively by African American activists like James Forten and David Walker, and later by John Brown, Elizabeth Cady Stanton, and Free Lovers like Marx Lazarus.

What do you want readers to take away from this book about the lessons for today?

I hope American Radicals makes it clear that social justice protest has been a defining force in American history. As we grapple with the deep roots and long aftermath of colonialism, slavery, capitalist exploitation, it’s important to know that there was always profound opposition to those forces as well. This period saw the rise of modern social justice movements that transformed American society, though their work is far from complete. People who care about these issues today should understand themselves as part of a long tradition.

In 1854, Henry David Thoreau said he was plagued by a “sense of having suffered a vast and indefinite loss,” and he realized “that what I had lost was a country.” Then, as now, Americans were outraged about family separation, sexual assaults on women, an economic 1% exerting outsize control on the government, the devaluation of black lives. Americans have felt this sense of personal grief and outraged patriotism before, and it has fired some of the finest moments in our history.