Walter G. Moss is a professor emeritus of history at Eastern Michigan University and a Contributing Editor of HNN. He is the author of  Russia in the Age of Alexander II, Tolstoy and Dostoevsky and A History of Russia. 2d ed. 2 vols. He has also authored an essay on the indebtedness of religious thinkers Dorothy Day and Thomas Merton to Dostoevsky and other Russian writers in Beyond the Soul and Barbed Wire: The Continuing Legacy of Aleksandr Solzhenitsyn and Russian Voices in American Culture, David P. Deavel and Jessica Hooten Wilson, eds., forthcoming from Notre Dame Press in 2020. For a list of his other books and online publications click here. 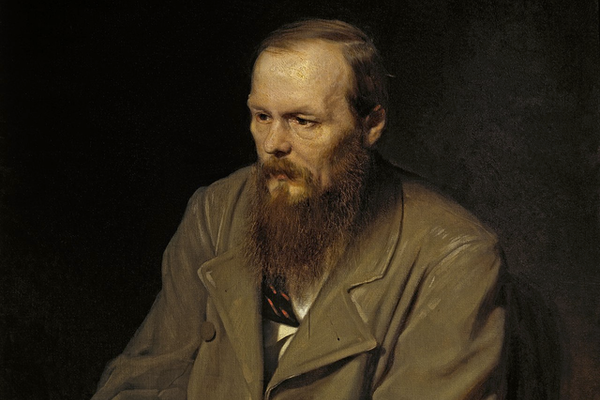 The great Russian writer Fyodor Dostoevsky has influenced many writers like William Faulkner, as well as other individuals from around the world. Americans unfamiliar with his life, and perhaps even with some of his greatest works like Crime and Punishment and The Brothers Karamazov can now get to know him via Amazon Prime’s 8-part subtitled series Dostoevsky, directed by the Russian Vladimir Khotinenko.

The series first appeared in 2011 (in 7 parts) on Rossiia 1 television channel, and a Western expert on Russian literature and film, Peter Rollberg, then wrote, “In scope and quality, Khotinenko’s 7-part biopic can be compared to the best HBO and Showtime history dramas, such as John Adams (2008) and The Tudors (2007-2010).”

Indeed the series has much to recommend it－good acting (especially by Evgenii Mironov as Dostoevsky), picturesque scenery (e.g., in St. Petersburg and foreign sites such as Baden Baden), and a fascinating story that, despite taking some artistic liberties, depicts well the tumultuous and eventful life of one of Russia’s greatest writers. Each episode begins with Dostoevsky sitting for the famous portrait of him painted by V. Perov in 1872.

As we watch the almost eight hours of the series, we witness some of the main events of his adult life beginning with his traumatic experience on a December morning in 1849 when he and other prisoners stood on a St. Petersburg square, heard their death sentences read out, and excepted to be shot by a firing squad. In his late twenties by then, Dostoevsky had already gained some fame as a writer, but became involved with dissidents whom the reactionary government of Tsar Nicholas I considered treasonous. Only at the last minute, did a representative of the tsar bring word that Nicholas I was going to spare the lives of the condemned, and Dostoevsky spent the next four years in a Siberian prison camp in Omsk, which he later described in his novel "The House of the Dead."

The first episode of the series is set mainly in this camp, and the gloomy existence of the prisoners may be off-putting to some viewers. But the experience was important to Dostoevsky. Himself the son of a serf-owning Moscow doctor, he was forced to mix with less educated common criminals, but came to appreciate their Russian Orthodoxy, their religion of Christ, of sin and suffering, of resurrection and redemption. He came to regret his earlier rebellious ideas, influenced by Western European utopian thinkers. His prison experiences convinced him that the only path for Russian intellectuals to follow was one that united them with the common people and their religious beliefs.

Through a variety of techniques, usually by having Dostoevsky state his convictions or argue with someone like the writer Turgenev, the series conveys his post-prison populism and Russian nationalism. In one scene in Episode 3, a young man at a dinner table tells Dostoevsky that he left St. Petersburg for prison camp “a dissenter and socialist, and you returned a defender of The Throne and Orthodoxy.” Toward the beginning of Episode 6, Dostoevsky tells the painter Perov, “The ones seeking freedom without God will lose their souls . . . . Only the simple-hearted Russian nation . . . is on the right way to God.”

But the series is more concerned with depicting his personality and love life, which begins to manifest itself during Episode 2, set mainly in the Central Asian-Siberian border town of Semipalatinsk (present-day Seney). Dostoevsky served in the army there for five years (1854-1859) before finally being allowed to return to European Russia. But his service allowed him sufficient time for writing and mixing with some of the town’s people, including Maria Isaeva, a somewhat sickly, high-strung, strong-willed woman in her late twenties.

Episodes 2 and 3 depict the writer’s stormy relations with her in Siberia and then in their early days in St. Petersburg. After she leaves Semipalatinsk to accompany her husband, who takes a new job in the distant town of Kuznetsk (today Novokuznetsk), he soon after dies. Dostoevsky makes a secret and unlawful trip to this Siberian city, but has to contend with a younger rival, a schoolteacher, for Maria’s affection.  Finally, after much agonizing by both Maria and Dostoevsky and another trip to Kuznetsk, the two marry there in February 1857.

While in Semipalatinsk, Dostoevsky makes a written appeal to his brother, Mikhail, and to an aunt for money. The writer’s financial difficulties, later exacerbated by gambling loses, will remain a consistent theme for most of the rest of the series.

After finally being allowed to settle in St. Petersburg in late 1859, Dostoevsky renews acquaintance with Stepan Yanovskiy, a doctor friend, and is introduced to his wife, the actress Alexandra Schubert. She and Dostoevsky soon become romantically involved, while Maria shows increasing signs of having consumption (tuberculosis)－she died of it in 1864. His main health problem was epilepsy, and occasionally, as at the end of Episode 3, we see him having a seizure.

In Episode 4, we are introduced to a young woman, Appolinaria Suslova, who for several years became Dostoevsky’s chief passion. Young enough to be his daughter, she reflected some of the youthful radicalism of the Russian 1860s. An aspiring writer herself, she was fascinated by the older author, and eventually had sexual relations with him. But their relations were stormy, often mutually tormenting, and while traveling in Western Europe together, she sometimes denied him any intimacy. A fictionalized portrait of her can be found in the character of Polina in Dostoevsky’s The Gambler (1866).

In Episodes 4 through 8, we see sometimes see Dostoevsky at the roulette tables from 1863 to 1871 in such places as Weisbaden, Baden Baden, and Saxon les Bains, usually loosing, and from 1867 to 1871 most often travelling with his second wife, Anna (nee Snitkina), whom he first meet when she came to him to work as a stenographer in 1866 to help him complete The Gambler and Crime and Punishment.

But Anna does not appear until Episode 6, and only after Dostoevsky’s infatuation with two very young sisters, Anya and Sofia (Sonya) Korvin-Krukovskaya, who later became a famous mathematician. Nevertheless, once Anna appears she remains prominent for the remainder of the series, first as his stenographer, then as his wife and the mother of his children. In Episode 7, they travel to Western Europe, where they remain in places like Baden Baden and Geneva until 1871, when they return to Russia. Throughout their marriage, Anna remains the level-headed, common-sense wife who tolerates and loves her much older mercurial husband. But the couple had their up-and-down moments, including the death of two children. The first to die, Sofia (Sonya) does so in May 1868, at the end of Episode 7.

Thus, to deal with the rest of Dostoevsky’s life－he died in January 1881－the Russian filmmakers left themselves only one episode, number 8. And much happened in that dozen years, including the couple’s return to Russia; the birth of more children ( two boys and a girl, but the youngest, Alyosha, died in 1878); trips to Bad Ems for emphysema treatments, and major writings (the novels The Idiot, The Possessed, The Adolescent, and The Brothers Karamazov and his collection of fictional and non-fictional writings in A Writer’s Diary).There are brief mentions and/or allusions to these writings, but not much.

Dostoevsky often encounters people whose last name is ungiven. In Episode 8, for example, he visits the dying poet and editor Nikolai Nekrasov, but only those already familiar with Dostoevsky’s biography might realize who he is. The final scene in that last episode shows Dostoevsky and a young bearded man whom he addresses as Vladimir Sergeevich sitting on hay behind a horse and carriage driver on their way to the famous Optina Monastery.

The not-further-identified young man, although only in his mid-twenties, was in fact the already well-known philosopher Vladimir Soloviev, son of Sergei Soloviev, who by his death in 1879 completed 29 volumes of his History of Russia from the Earliest Times. Dostoevsky had read some of his history and earlier that year had attended Vladimir’s "Lectures on Godmanhood." At one of these talks attended by Dostoevsky, Leo Tolstoy was present, but the two famous writers never met each other. During the remaining 22 years of his life, Soloviev went on to develop many philosophic and theological ideas and to influence later religious thinkers including Dorothy Day and Thomas Merton.

At Optina, Dostoevsky sought consolation from the death of his son Alyosha by talking to the monk Ambrose, who became the model for Father Zossima in his The Brothers Karamazov. And the brothers Alyosha and Ivan Karamozov, in different ways, reflect the influence of the young Soloviev.

Of the novel itself, one of Dostoevsky’s most influential, little is said in the series except when in the final episode, Dostoevsky tells a police official that he plans to write a work about a hero who goes through many phases and struggles with the question of the “existence of God.” The Brothers Karamazov deals with that question－but also, of course, with much more. And Dostoevsky did not live long enough to complete The Life of a Great Sinner, a work he had long contemplated but only managed to include portions of in some of his great novels.

Despite the many positive aspects of the 8-part series, it only hints at Dostoevsky’s relevance for our times. Just a few examples are his significance for understanding 1) Vladimir Putin and his appeal to Russians, 2) terrorism, and 3) whether or not to accept the existence of God and the implications of faith vs. agnosticism.

Regarding his influence on Putin, an excellent article by Russian-expert Paul Robinson thoroughly examines the question. He begins his essay by writing, “I’ve spent the last week ploughing through the 1,400 pages of Fyodor Dostoevsky’s Writer’s Diary. . . . The experience has left me pretty well acquainted with the writer’s views on the Russian People (with a capital ‘P’), Europe, the Eastern Question, and Russia’s universal mission. I’ve also just finished writing an academic article which discusses, among other things, references to Dostoevsky in Vladimir Putin’s speeches.”

In novels such as Notes from the Underground, Crime and Punishment, and The Possessed, Dostoevsky reflected on and provided insight into the thinking of many a terrorist. As one essay on his insight into terrorism indicates, Theodore Kaczynsk, the Unabomber, “was an avid reader of Dostoevsky.” Freud wrote on the great Russian writer and appreciated some of his insights into what is sometimes referred to as “abnormal psychology.” Some even claim that Dostoevsky “ought to be regarded as the founder of modern psychology.”

Regarding the existence of God, it is The Brothers Karamazov that is most often cited, especially its chapters on “Rebellion” and “The Grand Inquisitor,” where the brothers Ivan and Alyosha discuss whether to accept or reject God. Ivan rejects because he cannot accept any God that would allow innocent suffering, especially that of little children. In the agnostic Camus’s The Rebel he devotes his chapter “The Rejection of Salvation” to Ivan’s stance.

In summary, this reviewer’s advice: enjoy Amazon’s Dostoevsky but then go on to read more by and about him. You can even download his great novels and many of his other works at the Project-Gutenberg-Dostoevsky site.