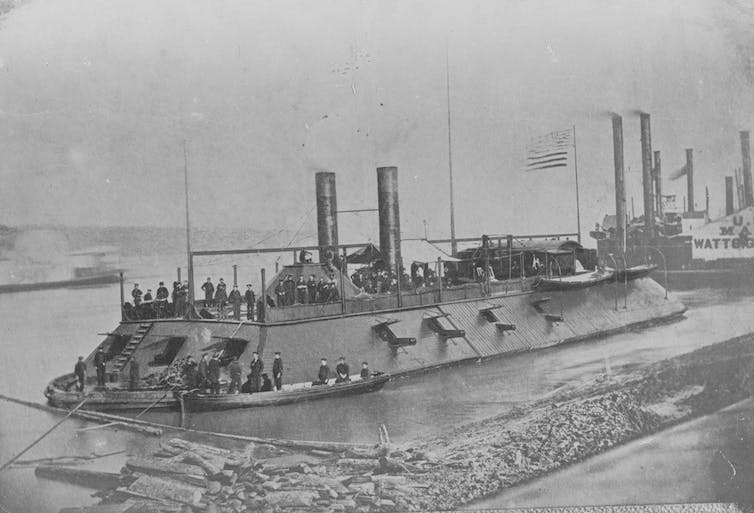 The USS Cairo pulls up to the banks of the Mississippi River in 1862. U.S. Naval History and Heritage Command

During the American Civil War, huge metal monsters roamed the Mississippi River. Called ironclads, these boats were about 50 yards long, carried 75 tons of armor on their hulls and decks, sported up to 13 guns, and had crews numbering up to 250 men.

The seven city-class ironclads, sometimes called the turtles, were the most recognizable boats in the fleet, but northern laborers also converted a few existing steamboats into armored vessels.

The Union used this cutting-edge naval technology to attack Confederate forts at places like Tennessee’s Fort Henry and Island No. 10, and Vicksburg, Mississippi. 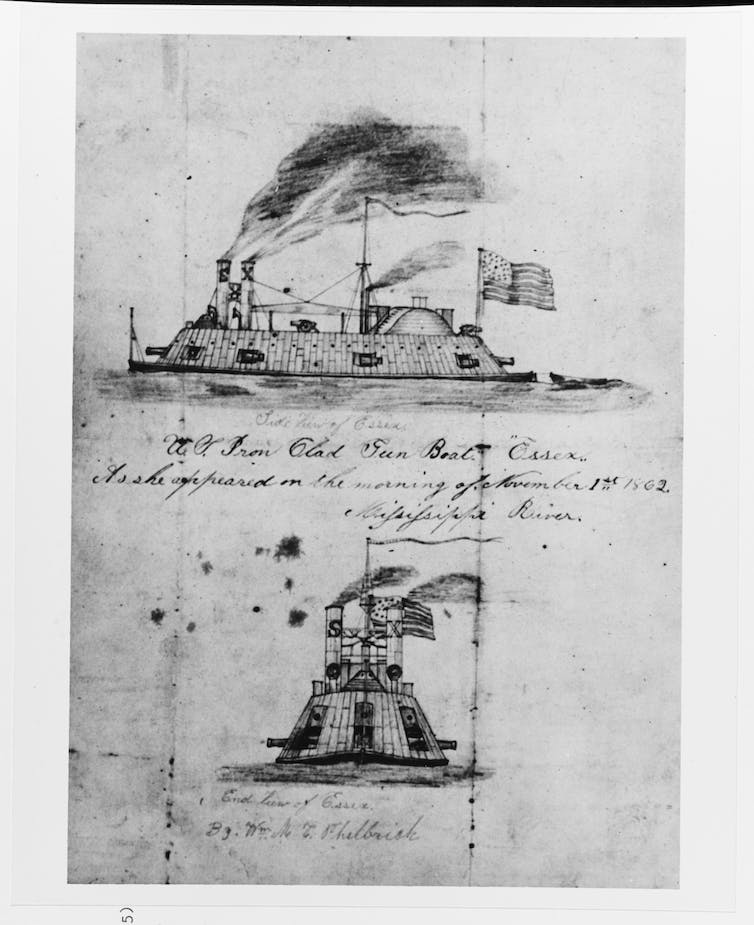 The USS Essex operating on the Mississippi River on Nov. 1, 1862, as drawn by William M.C. Philbrick, a crew member of a nearby Navy ship. U.S. Naval History and Heritage Command

But these conventional battles are only one part of the larger story of the Union’s Mississippi River Squadron.

As a Civil War historian who has been researching the Union’s river navy for seven years, I have learned that the fleet was important in ways beyond its attacks on southern forts. It protected Union transports and supply boats from Confederate ambushes. In the process, the Union navy waged a nasty war against southerners who supported the insurgents.

The evidence for this unconventional war is hidden in the shadows of the archives. Bits and pieces of information are littered throughout the Official Records of the Union and Confederate Navies, materials in the National Archives, collections of sailors’ letters and diaries, and post-war accounts.

Piecing together this fragmentary material, I created a database of 559 separate episodes where gunboats attacked a target, southerners shot at a federal boat, or there was a mutual fight. I then worked with my university’s mapping experts to analyze the data using computers.

As the resulting map makes clear, combat between Union gunboats and southerners occurred across the Civil War’s western theater but was also clustered in a few important areas. My research also reframes our understanding of the Civil War away from well-known battles to a constant, grinding war that sucked in thousands of civilians.

This irregular guerrilla war was an improvisation that began in earnest in the summer of 1862. By that point, Union ironclads and speedy rams had squashed the measly Confederate River Defense Fleet at Memphis. As northern armies began to march overland toward Vicksburg and elsewhere, they depended on steamboats for supplies.

The Confederates created mobile ambush squads that were conglomerations of artillery and cavalry and sent them to the shores of the Mississippi River and its tributaries to attack Union supply boats and the ironclad gunboats that protected them.

One of these ambush groups was a mixture of about 250 men from the Third Maryland Artillery and a squadron of Texas cavalry. They had four cannons, including one christened “Black Bess.” On May 3, 1863, they captured the Minnesota, a steamer carrying US$40,000 worth of Union supplies. 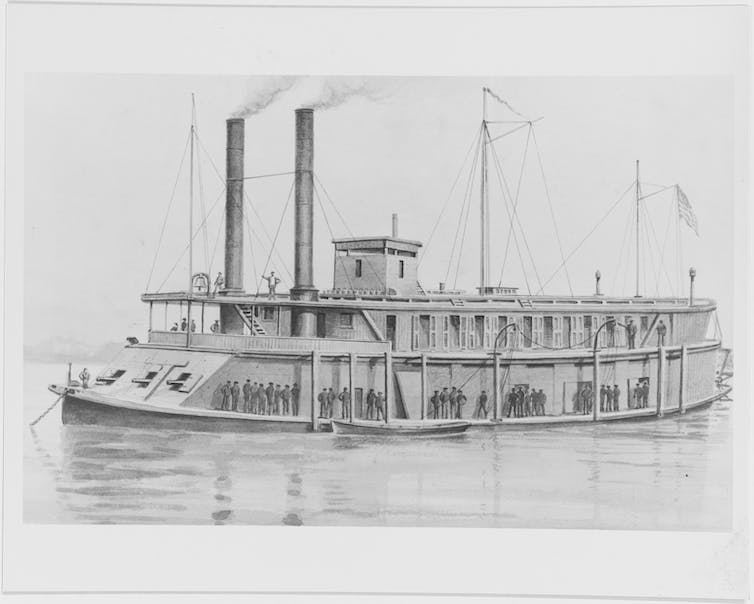 The USS Rattler, a so-called ‘tinclad’ gunboat made by putting armor on a rivergoing steamboat. U.S. Naval History and Heritage Command

Union commanders realized that their ironclads clustered their men into a few boats, so they improvised and created a fleet of tinclads, also known as “mosquitoes.” These boats were lightly armored, had a crew of about 70 men, carried six to eight light cannons and could go just about anywhere because they had a draft of 30 inches of water.

The crews of the tinclads and the other gunboats waged a deadly game of whack-a-mole along the western rivers. Whenever rebels popped up and attacked a boat, the fleet tried to smite it.

This reactive strategy failed because rebels could quickly retreat into the southern countryside, so Admiral David Dixon Porter devised a new strategy.

He gave Union commanders the authority to confiscate or destroy civilian property, including food, animals, cotton, buildings and personal property. Porter intended to starve rebels by depriving the men and their horses of food. He also hoped to inflict enough punishment on civilians that they would withdraw their support from the insurgents. 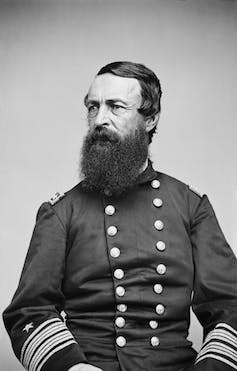 Union sailors were quick to carry out Porter’s orders. For instance, when Confederate-aligned guerrillas near Helena, Arkansas, killed one sailor from the USS Cairo and nearly captured another, revenge was swift. Union sailor George Yost, who was a 14-year-old cabin boy, reported that 40 sailors from the boat landed at a nearby plantation and burned “up all the houses barns and everything combustible near the scene of the assassination.”

But such punitive attacks often became plundering sprees. When the USS Cincinnati stopped at a plantation on the Mississippi River in March 1863, sailors went ashore and, after chasing away the owner, took 150 chickens, 600 pounds of bacon, a bull, some geese and a couple of guinea hens.

According to a sailor whose letters are in the Buffalo History Museum, they also helped themselves to bed clothes, pictures, crockery, “&c. &c. &c. &c. &c. &c.” – a clear implication that they took all kinds of personal possessions.

This strategy of exhaustion produced indifferent results. The Mississippi River Squadron was not able to quash resistance. Many civilians stayed loyal to the Confederacy and supported guerrillas until the war ended.

And since the boats only patrolled the water, they could not occupy the land and drive out the rebels. But the river navy provided enough protection to Union supply lines to ensure victory over the Confederate army. The Union’s Mississippi River Squadron didn’t have to win its war; it merely had to prevent the rebels from winning theirs.