James D. Zirin, a lawyer and former prosecutor, is the author of Plaintiff in Chief-A Portrait of Donald Trump in 3500 Lawsuits. 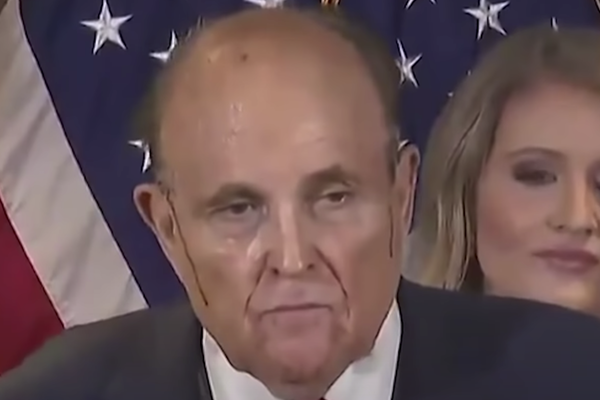 Has Donald Trump, like Hamlet, put “antic disposition on,” pretending to be  crazy because it serves his political purposes? Or is he really bonkers, insisting that he has won an election that is completely out of reach?

The reality should have set in long ago. All of the swing states that would have been necessary for Trump to prevail in the Electoral College have certified Biden’s victory. The transition to the administration of  President Elect Biden has begun.

Trump has brought at least 32 lawsuits in the six states that matter, attacking the election that he claims was riddled with “massive fraud,” and has won none of them. The Trump legal team has been called “the gang that can’t sue straight.” His lead attorney Rudy Giuliani recently went to the hospital with COVID-19. When the conservative dominated Supreme Court of Wisconsin threw him out of court the other day for doing something so elementary as not bringing his case first in the court of original jurisdiction, his litigation goose appeared to be cooked to a turn.

Yet, Trump in a video that no one but Facebook would publish, claims he won the election. Imagine! The President of the United States makes a video at the White House, and no one will publish it because it is drowned in so many lies and misstatements that is unworthy of serious attention.

Trump’s claims of election victory, if he really believes them, might appear to be the musings of a harmless psychopath. If I had a friend who consistently lost at the races, and yet claimed he had consistently won, I might tell his wife to have him psychiatrically evaluated. But our Supreme Court reminded us in United States v. Nixon that the President is entitled to a “high degree of respect,” and that we may not “proceed against the president as against an ordinary individual.” And, as Polonius observed about Hamlet, “Though this be madness, yet there is method in ’t.” So what is Trump’s game?

Seventy-four million Americans voted for Donald Trump. Of these, 80 percent don’t accept the outcome. Indeed, they refuse to agree that Joe Biden won fair and square. They say the election was rigged and tainted by “massive fraud.” Trump’s congressional enablers, Mitch McConnell and Lindsey Graham, don’t accept the outcome. Nor does House Minority Leader Kevin McCarthy.

In a nationally televised debate on December 7, Kelly Loeffler, running for a Georgia senate seat in a special election, refused to say that Trump had lost the election or even lost the state of Georgia. Trump had appeared in Valdosta, Georgia to endorse her candidacy. “Expose the massive voter fraud in Georgia,” Trump tweeted to his followers. Both of Georgia’s Republican senators running for re-election called for the resignation of Georgia Secretary of State Brad Raffensperger for standing by the count in his state. They trashed Georgia Governor Brad Kemp for certifying Raffensperger’s conclusion. Trumpists threatened both their lives and careers. Both state officials are Republicans, who voted for Trump. But Trump’s tweets put the word Republican in quotation marks beside their names to question both their loyalty and standing in the Party.

Gabriel Sterling, also a Republican, one of Raffensperger’s senior election staffers, called on Trump to condemn threats against election workers. On the steps of the Georgia State Capitol, he exhorted: “It has to stop, Mr. President, you have not condemned these actions or the language.” There was a deafening silence from the White House.

Trump fired Chris Krebs, his head of the Cybersecurity and Infrastructure Security Agency, for a statement his agency released, saying that: “There is no evidence that any voting system deleted or lost votes, changed votes, or was in any way compromised.” For this factual statement, a Trump campaign lawyer said on  national television that Krebs should be “taken out and shot.”

Attorney General Bill Barr, certainly Trump’s leading legal loyalist, probed whether there was fraud. He announced that the Department of Justice found no evidence of fraud in the election that would affect the outcome. Et tu Bill Barre? In response, Republican Senator Ron Johnson of Wisconsin challenged Barr to “show everybody” the evidence that there was no evidence. Nine Texas Republicans in Congress signed a letter chastising Barr for a "shocking lack of action" in response to unproven allegations that fraud occurred. It was all surreal. Trump summoned Barr to the White House for a tense and contentious dressing down. He later said he was “disappointed” that Barr, had not looked hard enough at purported evidence of voter fraud brought forth by his campaign. Barr refused to buy into the “massive fraud” narrative. Trump shredded him, and Barr announced on December 14 that he would resign before Christmas. No one takes well to being bullied or belittled.

Senator Ted Cruz urged the Supreme Court to hear a Trump challenge to the results in Pennsylvania even though Trump was thrown out of court on procedural grounds for failing to make a particular allegation of  fraud in the election. Rudy Giuliani told the Pennsylvania court that he was not claiming fraud. If not fraud, what is he claiming?

This is not insanity; it is authoritarianism. It is not democracy either. America has always prided ourselves on the peaceful transfer of power. It is not to be in 2020 where Trump has seriously undermined the democratic process in a way that Richard Nixon and Al Gore, who also lost close elections, refused to do.

But Trump, at least for the time being is the leader of the Republican party and will remain so after January 20. Asa Hutchinson, the Republican Governor of Arkansas is a relative moderate in Trump’s party. Yet, he said that Trump would be the leader. He attracts the crowds, Hutchinson said. At the moment, polling tells us that, quite astonishingly, Trump is the favored candidate for 2024, leading by double digits a field of other GOP notables including  Mike Pence, Nikki Haley, Mitt Romney and Ted Cruz.

Trump has the money, and he has the muscle. If any “Republican” in office gets out of line there will be reprisals: a primary fight, a demotion in party ranks or a tweet disparaging their character. It was Lear, not Hamlet, who said that “a dog’s obeyed in office.”

Pundit Max Boot argued in the Washington Post in November that Trump’s real legacy may be an increasingly authoritarian Republican party. Republicans have lost the popular vote in seven of the past eight presidential elections. But that won’t likely bring reform. The Electoral College and the Senate give undue weight to red states and rural areas, and that’s where Trump’s power lies. If the Republicans don’t break with the truth decay that is Trump, we are facing the kind of authoritarian world we have witnessed with  political parties in Turkey, India Poland, and Hungary. Then, we will see that something is truly rotten in the state of America.