The History of Skipping a Successor's Inauguration

Michael Patrick Cullinane is Professor of U.S. History at the University of Roehampton, London. He is the author of Theodore Roosevelt’s Ghost: The History and Memory of an American Icon and the founder of the UK Presidential History Network, which conducted scholarly rankings of the American presidents in 2018. He has written for the Washington Post and has appeared on CNN, Sky News, and the BBC. 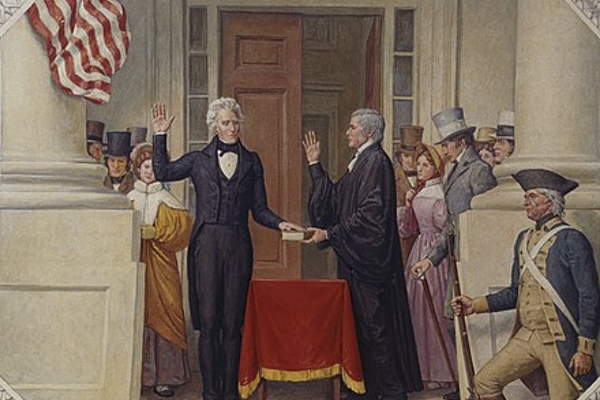 Donald Trump’s decision to skip Joe Biden’s inauguration harkens back to the early nineteenth century when, on four occasions, presidential inaugurations went ahead without the sitting president. The circumstances seem eerily similar to 2021.

John Adams set a precedent in 1801. On the morning of Thomas Jefferson’s inauguration, he vacated the White House. To avoid bumping into the next president he fled the city at 4 a.m. in the dark of night. Historians agree that the election of 1800 prompted Adams to keep away. The election took American politics to a new low as Jefferson’s and Adams’s surrogates bitterly smeared the founders and their rival parties. Jefferson’s victory signaled the public dissatisfaction with Adams’s tenure and began the permanent decline of the Federalist Party. But Adams left a lasting impact with the appointment and confirmation of John Marshall as Chief Justice of the Supreme Court less than a month before his departure. Marshall became one of the most consequential decisions Adams made and maintained a degree of balance in the early Republic.

The next president to boycott the inauguration of a successor was Adams’s son John Quincy. Twenty-eight years later after his father bailed on Jefferson’s inauguration, John Quincy stayed away from Andrew Jackson’s big day. He had lost re-election in a campaign that rivaled his father’s against Jefferson. John Quincy spent the duration of his lame duck transition sulking in the White House and refused to communicate with the incoming administration. Jackson was no better. When John Quincy offered to leave the White House early, Jackson ignored the letter. Like his father, John Quincy also tried to make a late appointment to the Supreme Court, but failed when the Senate refused to seat his nominee. On his last night John Quincy mounted a horse and rode out of the city.

The Adamses had created a tradition of sorts and the next president to lose re-election followed their lead. Martin Van Buren lost the 1840 election in a landslide and would dodge his successor William Henry Harrison’s inauguration. Indeed, Van Buren did not get an invitation, so it would seem the custom of losing presidents not attending was recognized by incoming and outgoing presidents alike. In an uncanny parallel, Van Buren also made a late appointment to the Supreme Court. In his last week in office, he managed to get Justice Peter V. Daniel a seat on the bench. Van Buren moved into temporary accommodation in Washington before returning to New York shortly thereafter.

The experience of the Adamses and Van Buren should sound familiar. Donald Trump appointed Amy Coney Barrett shortly before the 2020 election and had attempted to thwart the smooth transition of power by refusing to communicate with Biden’s team. But perhaps the greatest historical analogy is the disgraced presidency of Andrew Johnson. Following the assassination of Abraham Lincoln in 1865, Vice President Johnson assumed the presidency. The former slave-holder from Tennessee joined Lincoln’s ticket for geographical balance and to attract voters in border states, but Lincoln’s contemporaries viewed the southerner as a political liability. Their worries came to pass when President Johnson advocated leniency toward former Confederates and stifled Republican efforts to reconstruct the Union. In 1867, Congress impeached Johnson for breaching federal laws designed to restrict his power. Although the Senate narrowly acquitted Johnson of eleven counts, he became the first president to be impeached. The Democratic Party refused to nominate Johnson in the 1868 election and former Union General Ulysses S. Grant won the presidency. Humiliated by impeachment and without support from his own party, Johnson refused to attend the inauguration of Grant.

The apocryphal maxim that “history does not repeat, but it rhymes” has never seemed so apt. It’s also sounds a worrying tocsin because the political strife of the early nineteenth century led directly to the nation’s bloody Civil War. At the outset of Donald Trump’s presidency, I told a public audience that the 45th president was not the most divisive president the United States had elected. One of its greatest presidents, Abraham Lincoln held that repute because his inauguration sparked the exodus of southern states from the Union. Yet as the days of Trump’s administration wane, and the attack on the Capitol can be fully digested, the fear of further upheavals, coup attempts, convulsions, and violence jeopardize the peaceful transition of power. What’s worse, it sets the United States back some one-hundred years in its political development to a time when division was the norm and harmony unusual.