Steve Hochstadt is a professor of history emeritus at Illinois College, who blogs for HNN and LAProgressive, and writes about Jewish refugees in Shanghai. 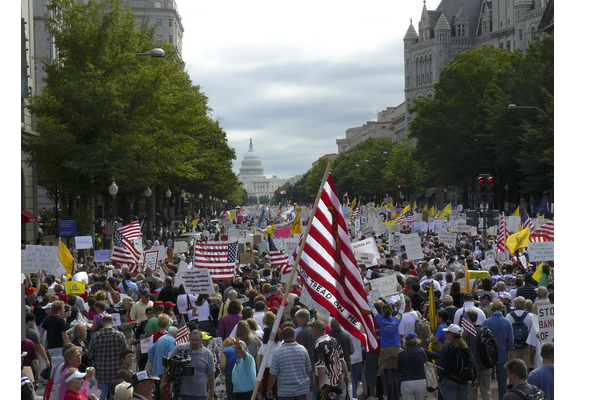 Ten years ago, the Tea Party was big news. The Tea Party announced itself just as I began writing political op-eds in 2009. I found them deeply disturbing. They proclaimed their allegiance to freedom as loudly as they threatened mine. I didn’t agree with their economic claims that the deficit was America’s biggest problem, and I suspected their pose as the best protectors of the Constitution was a front for less reasonable beliefs about race, gender, and religion.

Founded in 2009 as a reaction to the election of Barack Obama as President, the federal bailouts of banks and other institutions in the wake of the great recession of 2008, and, later, the passage of the Affordable Care Act in 2010, the Tea Party entered conservative politics with a splash in the 2010 elections. NBC identified 130 candidates for the House and 10 for the Senate, all Republicans, as having strong Tea Party support. Among them, 5 Senate candidates and 40 House candidates won election. Those numbers are very high, because many Tea Party candidates defeated established politicians. Pat Toomey in Pennsylvania, Rand Paul in Kentucky, Marco Rubio in Florida, Ron Johnson in Wisconsin, and Mike Lee in Utah defeated more established politicians, including some incumbents, in both parties. They are all still Senators. Among the 5 Senate candidates who lost, Christine O’Donnell in Delaware, Sharron Angle in Nevada, and John Raese in West Virginia took extreme and sometimes laughable positions; Ken Buck in Colorado and Joe Miller in Alaska lost by tiny margins.

The Tea Party claimed to follow an ambitious agenda. One list on teaparty.org of “Non-negotiable Core Beliefs” included many economic items: “national budget must be balanced”; “deficit spending will end”; “reduce personal income taxes a must”; “reduce business taxes is mandatory”. A slightly different list called the “Contract from America” was also heavy with economic priorities: a constitutional amendment requiring a balanced budget; a single-rate tax system; “end runaway government spending”; “stop the pork”. The Contract included no social issues at all. The Core Beliefs began with “Illegal Aliens Are Here Illegally”, and included “Gun Ownership is Sacred”, “Traditional Family Values Are Encouraged”, and “English As Core Language Is Required”. Tea Partiers claimed complete allegiance to the Constitution as originally written.

Recently many commentators have asserted that the Tea Party was a failure and is dead. A NY Times article said “the ideas that animated the Tea Party movement have been largely abandoned by Republicans under President Trump”, because deficit spending has ballooned since he took office. Senator Rand Paul said “The Tea Party is no more.” A New Yorker article noted “the movement’s failure”, because they did not achieve a repeal of Obamacare. Jeff Jacoby, the conservative columnist for the Boston Globe, “mourned its demise in February 2018 under the title, “The Tea Party is dead and buried, and the GOP just danced on its grave”. He focused on the Tea Party’s inability to get Republicans to rein in spending.

Most of the successful Tea Party candidates from 2010 are no longer in Washington. Aside from the 5 successful Senators, only 16 of the 40 Tea Party House membersare left. Justin Amash recently left the Republican Party after indicating support for impeachment. But those figures are not a surprise. The average tenure in office of a member of the House is just under 10 years, so about half should have left by now. Two moved up in the political world. Mick Mulvaney is now head of the Office of Management and Budget. Tim Scott won election as a Senator.

The whole narrative of Tea Party failure is wrong, in my opinion. While Tea Party organizations proclaimed high-minded principles of fiscal restraint, I don’t think that complex budgetary issues or particular readings of the Constitution motivate masses of voters. Today’s Republican Party is entirely in the hands of Trump, he completely ignores adherence to the Constitution and maintaining a balanced budget, and Tea Partiers are delirious with joy. The enthusiasts who scream at Trump rallies are the same people who signed on to the Contract from America in 2010. Trump embodies their real core beliefs: white supremacy; opposition to abortion rights, gay marriage, transgender people and anything that appears to deviate from their mythology of the “traditional family”; opposition to government regulation of private business, but support for government intrusion into private life; opposition to gender equality.

The social scientist Theda Skocpol, who studied Tea Party grassroots at the beginning, dismissed their economic policies as window dressing. She argued in 2011that these white older conservative Americans “concentrated on resentment of perceived federal government “handouts” to “undeserving” groups, the definition of which seems heavily influenced by racial and ethnic stereotypes.” She noted that “the opposition between working and nonworking people is fundamental to Tea Party ideology”, and that “nonworking” was assumed to refer to non-white. In a recent interview, Skocpol identifies Tea Party advocates as Christian conservatives, not libertarians. Today the Christian right shouts its joy about Donald Trump from every pulpit.

I was right and wrong about the Tea Party in 2010. I recognized that “The Tea Partiers are wrong. The people they support will increase government intrusion into our private lives, under the guise of protecting us from enemies all around, and will help big business exploit our private resources.”

I also wrote, “They won’t change American politics. Despite putting pretty faces like Glenn Beck and Sarah Palin on their posters, they’re way too unattractive. Like the guy who strolls into Starbucks with his gun, they might get a lot of attention, but they’ll make no friends.” How wrong that was. Their disdain for the views of other Americans, their distorted understanding of the Constitution, their blindness to facts which do not support their ideology, their racism and sexism, are now in control of the White House. The Republicans they called RINOs are gone.

They only supported limited government when a black man was President. Now they shout for the arrest of anyone they don’t like. The Tea Party no longer needs to attack the Republican Party from the right. They are the Republican Party, and their desire to recreate our country in their image is non-negotiable.